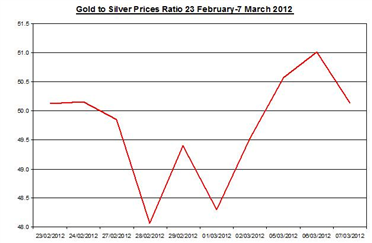 Gold and silver bounced back from their three consecutive days of falls, and ended up yesterday’s trading in the green. The anxiety regarding the developments in Greece may have been among the factors to drag gold and silver prices in the past few days. The recent news regarding Greece t is that 60% of private investors holding Greek bonds will join the debt swap. This news may ease the anxiety in the markets and thus boost the Euro. According to Bloomberg bullion holdings in the Exchange Traded Products reached record holdings. If this direction will continue it further help rally gold prices. Today there are many items on the agenda including: ECB Press Conference and Euro Rate Decision, U.S. Unemployment Claims weekly update, Australia’s Trade Balance report and China’s CPI.

The ratio between gold and silver fell on Wednesday, and reached 50.14. During the month the ratio rose by 1.5% as gold has slightly outperformed silver. In the chart below are the changes in this ratio during the last few weeks.

ECB Rate Decision: Last month Mario Draghi left the rate unchanged at 1%; as of January, the Euro Area inflation rate slipped to an annual rate of 2.7%, while the EU unemployment rose to 10.7% and the EU GDP in the fourth quarter declined by 0.3%. This means the EU economy is still not out of the woods. The recent LTRO plan may have been among the reasons for the deprecation of the Euro during last week along with the developments in Greece. If ECB will cut rates, which doesn’t seem likely, it may trade down the EURO/USD and consequently affect gold and silver;

U.S. Unemployment Claims:initial claims edged down to 353,000 claims for the week ending on February 26th; the number of insured unemployment slipped by 2,000 to 3.402 million during the week of February 18th; the upcoming weekly update might affect the strength of the USD;

Yesterday, gold and silver bounced back from their recent downward trend of recent weeks. The situation in Greece regarding a potential default may affect the strength of the Euro, which in turn may affect the direction of gold and silver. Having said that, the recent news from this front is that it seems there will not be default for now. Furthermore, if ECB will keep rates unchanged, which seems likely, mainly due to all the recent drama regarding Greece then this may further help rally the Euro.

How Will a Greek Default Affect The Price of Gold?