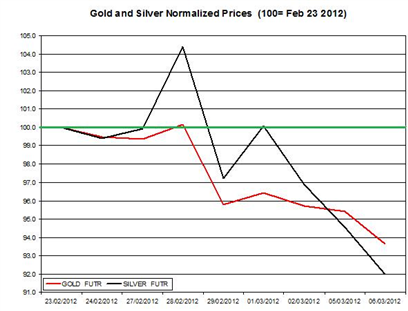 Gold and silver declined for the third consecutive day. There are still speculations around the possibility of Greek default, which could come into effect on Thursday. But due to the LTRO, EU banks may have enough funds to offset any losses from a possible Greek default. This Greek news however may be partially responsible to the recent decline in Euro and bullion prices. As in the flash report, the Euro Area GDP declined by 0.3% in the last quarter of 2011 according to yesterday's report. This news may have been among the contributing factors to the fall of major stock indexes, commodities and many currencies such as the Euro.

Today the German Factory orders monthly update will be published and ADP estimate of U.S. non-farm payroll for February.

The chart below shows the downward trend of gold and silver during the last couple of weeks (prices are normalized to February 23rd). 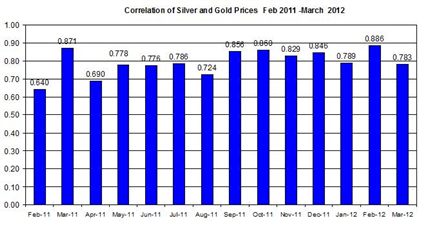 German Factory orders: this report will show the changes in the Germany factory orders during February; this news may indicate the development of the German Economy and consequently may affect the direction of Euro and precious metals prices;

ADP estimate of U.S. non-farm payroll:ADP will estimate the U.S employment development during the month of February 2012 in anticipation for the upcoming no-farm report to be published on Friday;

The Euro/USD sharply declined on Tuesday by 0.80% to 1.3111; furthermore, the AUD and CAD also sharply depreciated against the U.S. dollar by 1.1% and 0.73%, respectively. These currencies pairs are historically linked with the developments of gold and silver, even though in recent weeks their linear correlation have weakened; if the Euro and AUD will bounce back and rise during the day; it may indicate metals will also trade up.

Yesterday, gold and silver continued their downward trend of the past couple of weeks. The possibility of another stimulus plan in the U.S. is low at least for the next few weeks. In the meantime, the further decline in Europe's economy pulls down its currency and drags along with it other currencies such as the Aussie dollar and consequently metals. After three consecutive days of falls, gold and silver might bounce back as a corrective measure to their tumble. Especially if the German factory orders will rise it could further push up a bit the Euro along with metals. If ADP will estimate another big month for the U.S. labor market it could curb the metals prices rally.