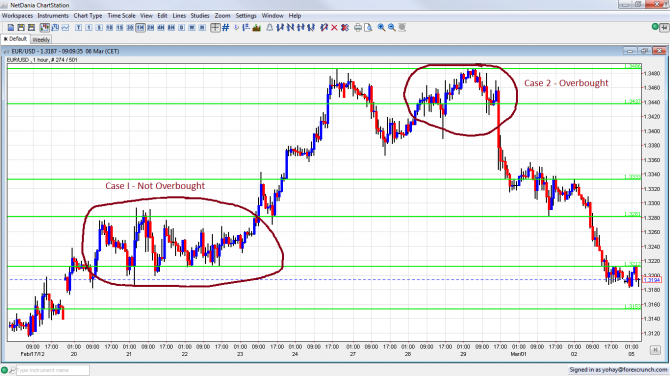 Guest Commentary: Overbought or Not? Examples with EUR/USD

We recently discussed how to identify or dismiss cases in which a currency pair is oversold or overbought. This is based on the character of the bounce from a support or resistance line, together with keeping an eye open on fundamentals.

Here are two examples on EUR/USD from recent weeks.

This is seen on the chart:

The first example is from the week beginning in February 20th. The pair continued the previous climb and eventually settled in a range, roughly between 1.3212 and 1.3280.

After reaching higher ground, a bounce came, but this bounce was shallow and limited. The pair didn’t manage was stuck and had a dead cat bounce.

What was the main story those days? The Eurogroup meeting in Brussels managed to cut a deal regarding the second Greek bailout, which was seen as good news at that time, before the doubts began to surface.

Both the dead cat bounce and the good fundamental news eventually paved the road for more gains. The pair moved higher on February 23rd and made an impressing move higher.

The second example is from the following week, from February 29th. You can see the pair gradually rising towards 1.3486, for a second time, and then retreating.

It didn’t get stuck in a range, but just moved up and bounced lower. This cat is alive.

In addition, Ben Bernanke’s testimony was less dovish than expected, and he gave a boost to the dollar.

The result of the real bounce and these two factors a much weaker EUR/USD in the following days.