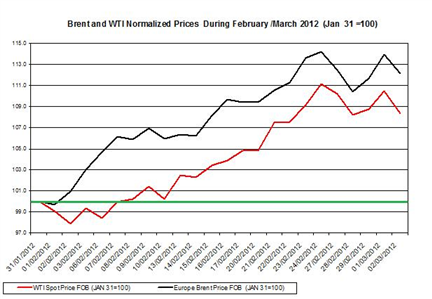 Oil prices remained high even though during last week Brent shed 1.78% off its value and WTI declined by 1.87%. Other commodities such as gold and silver also sharply declined last week. The positive news of the 3% growth of the U.S GDP during the last quarter of 2011 may have pulled up the price of oil during last week. Tornados had struck several cities throughout the South and Midwest of the U.S. during the weekend and caused severe damage and killed at least 37 people. For the time being there weren't reports of any damages to pipelines that might affect the oil or natural gas supply.

The Brent premium remained in the $16 to $18 mark. Will oil continue to decline during the upcoming week? Let's examine the oil market and the main financial reports that may affect the path of oil.

The gap between Brent and WTI remained in the range of $16 to $18. During February the premium sharply rose by 35.32%. The tensions between Iran and Europe will probably keep the Brent premium high in the weeks to come. 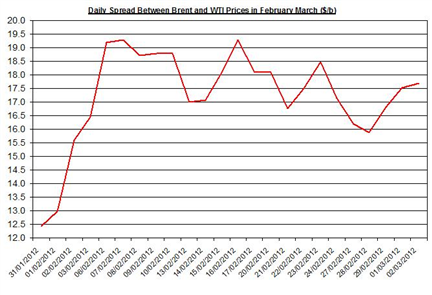 This monthly report will show the main developments in crude oil and natural gas's supply and demand worldwide; the report will also analyze the changes in the production of OPEC countries during December; the recent fluctuations in oil prices might be stem, in part, from the developments in OPEC's oil production; (Here is a summary of the recent OPEC report);

The upcoming report will be released on Friday, March 9th.

The upcoming report will come out on Wednesday, March 7th and will refer to the week ending on March 2nd.

Thursday– ECB Press Conference and Euro Rate Decision: In last month's rate decision the President of the European Central Bank, Mario Draghi kept the rate flat at 1%; as of January, the Euro Area inflation rate edged down to an annual rate of 2.7%, while the EU GDP in the fourth quarter declined by 0.3% . This means the EU economy is still slowing down. If ECB will reduce interest rates it is likely to pressure further down the Euro;

Friday–American Trade Balance: This report will show the developments in imports and exports of goods and services to and from the U.S, including crude oil; The American trade balance report for December the goods and services deficit rose during the month to $48.8 billion.

Friday– U.S. Non-farm Employment Report: in the recent February report regarding January 2012, the labor market continued to improve as the number of non-farm payroll employment expanded by 243k; the U.S unemployment rate slipped to 8.5%; this report might affect not only the USD, but also commodities (see here my last review on the U.S employment report).

The premium of Brent over WTI didn't change much during last week, but is still high. The U.S economy continues to show signs of improvement and thus may keep the WTI high. The tensions between Iran and Europe will probably continue to be among the factors for the high oil prices.

In the upcoming week there are several financial reports and events that might affect oil including the ECB rate decision and U.S. non-farm payroll report. If the US report will show progress, it might trade up oil. Finally, if major currencies including EURO will depreciate against the USD, this may also adversely affect oil.