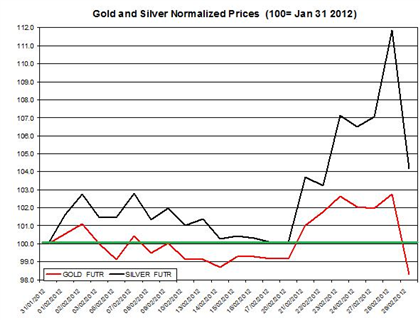 Gold and silver changed direction and plummeted yesterday. The last time gold and silver declined so sharply and promptly was back on December 14th when the FOMC disappointed bullion traders as there were no announcements of QE3. This time was very similar and Bernanke's testimony disappointed traders. Furthermore, ECB announced yesterday the bank will allot €529.5 billion to LTRO – this was higher than expected and may have also affected Euro/USD. Finally, the US GDP 2011 Q4 growth rate reached 3% according the recent update. This news may have also pushed up USD against other currencies and lowered the chances of another QE3. Today there are several items of the agenda worth mentioning including: the US jobless claims weekly update, the U.S. ISM Manufacturing PMI and the Bernanke will testify again in the House of Representatives.

The complete daily analysis on gold and silver prices

The chart below shows the developments of gold and silver during the month (prices are normalized to January 31st).

Bernanke Testifies: following yesterday's testimony and the immediate effect it had on gold and silver, Bernanke is set to testify again today before the Committee on Financial Services, of the U.S. House of Representatives; the title of the speech is "Semiannual Monetary Policy Report to the Congress" ; if Bernanke will try to make a correction to yesterday's testimony ramifications, it might affect the bullion markets;

U.S. ISM Manufacturing PMI: This report will present the monthly development in the manufacturing sector on a national level. In the recent report, the index increased to 54.1%; this index might affect commodities prices (see here my review of last report);

Gold and silver changed direction and plummeted yesterday by the largest scale in a long time. This means we might be headed towards a bumpy ride… The US GDP update, Bernanke's testimony and the recent larger than expected LTRO affected not only forex market (especially the Euro), but also commodities. Following such a huge drop in gold and silver today there might be a market correction – I speculate there could be a slight gain to these metals. Finally, the upcoming back to back testimony of Bernanke could also affect the US dollar and bullion if he will try to make a correction to yesterday's testimony ramifications.