Following the sharp gains for gold and silver during January when gold price rose by 11% and silver by 19.15%, the situation in February was much different. Gold increased by only 2.07% from the end of January; silver has added 6.49% to its value. What were the events and decisions that may have affected the direction of gold and silver during February? Part of it might have to do with the recent decision of the EU leaders to approve the bailout package for Greece. Will gold and silver prices reignite their rally from January and trade up during March 2012? Let's analyze the metals market for February and provide a short outlook for gold and silver for March 2012.

Gold and silver started February with little changes; this no-trend, however soon turned into sharp gains.

During the first part of February, the USD slightly depreciated against the Euro, CAD and AUD; the last two currencies are usually strongly correlated with metals; during the second part of February, the USD sharply depreciated mainly against the Euro; this shift might partly explain the sharp increase of gold and silver during the second part of the month. 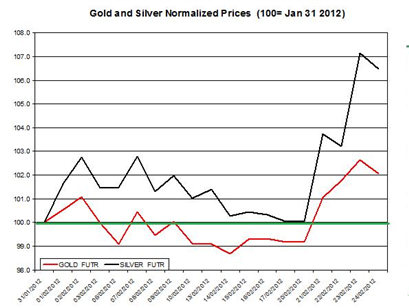 The next chart presents the shifts in the ratio of gold to silver during February; the ratio didn't change much during the month until the last few days of the month when the ratio plummeted. The ratio decreased as silver has outperformed gold. In the last week of February the ratio declined to nearly the 50 mark – lowest mark since October 2011. 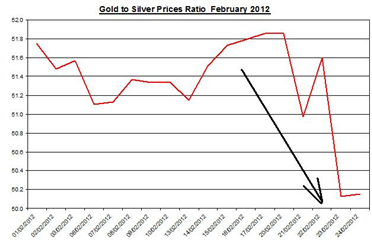 Here are several factors that may have contributed to gold and silver to trade up during February:

Here are several factors to consider that may affect the direction of gold and silver:

In the February report, the U.S labor added 243k jobs to the labor force. This report has had a negative correlation with gold and silver prices via the U.S dollar.

The upcoming testimony of Bernanke on March 1st and even more importantly the FOMC meeting which is set to March 13th could shake up the precious metals market. If there will be another announcement of monetary easing such as QE3, it could promptly and positively affect gold and silver. But I speculate there won't be a big announcement of QE3.

In conclusion, I speculate gold and silver will continue to trade up at a similar slow pace during March as they did during most of February; there might be large gains to gold and silver if the Federal Reserve will hint of another QE plan (but I doubt that). On the other hand, as the month will progress, I also speculate gold and silver might trade down if the concerns regarding the European debt crisis will reignite. If the U.S. will continue to show signs of recovery it could also negatively affect the direction of precious metals prices. Finally, if the major "risk currencies" will rise as they did during February (mainly the Euro) this could also pressure up precious metals.

Examining the Recent Silver Rally, Will It Last?