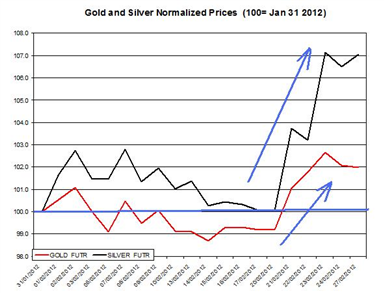 Gold and silver slightly fell on Friday after they have risen very precipitately during most of the week. There are several updates regarding the Greek debt crisis including the German vote, ECB lending policy and more. Bloomberg reports gold holdings in Exchange Traded Products increased for the fifth consecutive day to a record high. Today, the U.S Core Durable Goods report will be published and the U.S. Consumer Confidence.

See here for the complete daily setup on gold and silver prices.

ECB said it “has decided to temporarily suspend the eligibility of marketable debt instruments issued or fully guaranteed by the Hellenic Republic for use as collateral in Eurosystem monetary policy operations". This announcement came soon after the rating agency Standard and Poor's cut Greece's credit rating to "selective default". This news however doesn't seem to take the financial community by surprise as the Euro only slightly declined yesterday.

In Germany, Merkel won the preliminary vote to approve the Greek bailout package.

U.S Consumer Confidence: according to the recent report, the consumer confidence index slipped in January compared with December's index. The current expectations are that this index might change direction and rally in the February index since the U.S. economy has shown some signs of progress; this report might affect commodities prices via the US dollar;

Gold and silver started off the week with little changes, after they have sharply rose during most of last week. In general, yesterday was a slow day not only for precious metals but also for other commodities such as crude oil, forex and stock markets. Today probably won't be much different as there aren't many events or headlines that could affect the bullion market. The upcoming U.S reports to be published during the day might affect the strength of the USD and consequently the direction of gold and silver.