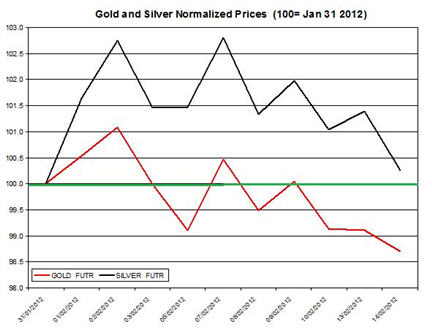 Gold and silver continue to dwindle as they have finished yesterday's trading with moderate falls. Its still seems that Greece will have to pass additional budget cuts before it will receive the second bailout package. This news might affect the commodities markets during the day. Today, the following events and publications will be on the agenda: Euro Area GDP for the fourth quarter of 2011, Bank of England's Governor King speaks and the minutes of the last FOMC Meeting.

For the rest of the gold and silver daily outlook, see here.

Gold slightly fell yesterday by 0.42% to $1,717.7; silver also slightly decreased by 1.11% to $33.35. The Euro/USD also slightly declined during yesterday's trading by 0.39% to 1.3134; other currencies such as the AUD also slightly depreciated. If the Euro and AUD will change direction and trade up today, it could indicate that metals will follow and also rise.

The chart below presenters the development of gold and silver during February (prices are normalized to January 31st).

During recent months there has also been a downward trend in the volatility of gold and silver as their standard deviations have declined; as of February they have reached their lowest level since July 2011. This might suggest that precious metals fluctuate less in recent weeks than they have in the past. 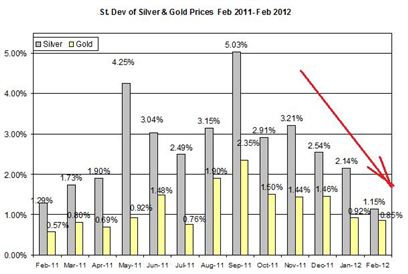 FOMC Meeting Minutes: Following the recent FOMC meeting, in which it was decided to extend the pledge of keeping the interest rates low until late 2014. The minutes of the meeting might offer some insight behind this decision;

Euro Area GDP 4Q2011 Report: Germany France and Italy will publish their preliminary fourth quarter GDP for 2011. During the third quarter of 2011, the Euro Area GDP grew by only 0.2%. The current expectations are of a low growth rate in Q4 2011 (see here recent report);

Gold and silver continue to zigzag from gains to losses with no clear trend. Despite their moderate decline during yesterday's trading, they have already started off the day rising. Their shifts of recent weeks coincide with the direction of the Euro. Thus, these currencies' path during today's trading might also affect the direction of the gold and silver. Finally, the financial reports that will come out today including the EU GDP report and the minutes of the last FOMC meeting might influence commodities traders, assuming there will be unexpected results.

What Are the Potential Outcomes for Silver in 2012?