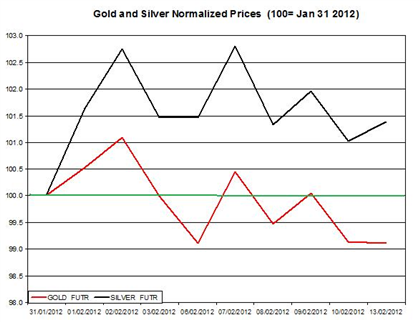 Metals started off the week with slight changes as gold moderately declined and silver slightly rose. Moody's will cut the credit ratings of six EU countries. It might cut in the future the rating of France, UK and Austria. . Greece has passed its austerity plan in its parliament. The markets seem confident Greece will now receive the next bailout package. Today, the following financial reports will come out: Great Britain CPI, U.S. Retail Sales and German ZEW economic sentiment.

For the rest of the gold and silver market daily reviews see here.

During February, gold declined by 0.89% while silver rose by 1.38%. The Euro/USD also nearly didn't shift during yesterday's trading. It ended up declining by 0.08% to 1.3186. During February Euro/USD rose by 0.79%; on the other hand during yesterday's trading, other currencies such as CAD and AUD slightly appreciated against the USD. If the Euro and AUD will trade down today, it could indicate that metals will follow and also fall.

Gold and silver continue to shift from gains to losses with no clear path as they have been doing during most of February. The ongoing development from Greece and recent announcement of Moody's might adversely affect the Euro and thus may also trade down gold and silver during the day. The financial reports to be published today (listed above) might also affect the commodities markets.