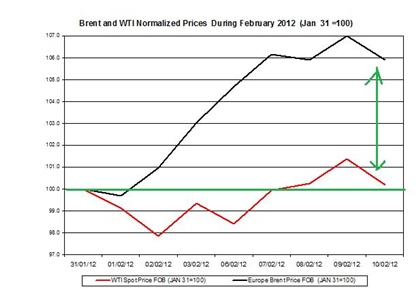 Oil, much like other commodities such as gold and silver, continued to moderately climb up as it has been doing in recent weeks. The big news for oil was the sharp increase in the premium of Brent over WTI as the premium reached during the week the highest level since November. Will this premium continue to increase? Let's examine the oil market the main news items and events that may affect the direction of oil in the upcoming week.

In the chart below are the changes of WTI and Brent during February (prices are normalized to January 31st).

Premium of Brent over WTI

The difference between Brent and WTI sharply increased during last week and reached on Friday to $18.80. During February the premium sharply rose by 52.25%. The ongoing tensions between Iran and the West including Iran's threat to close Strait of Hormuz, where nearly 20% of the world's crude oil is passing through, might keep contributing to the rise of the Brent premium.

According to the recent OPEC monthly report, OPEC oil production remained unchanged during January compared with December's 2011 oil production levels. IEA revised down again its projection for the global oil demand in 2012. The oil inventories of OECD dropped by 40.8 million bbl. The oil stockpiles are still well below the 5-year average for the sixth consecutive month. These news items may have been among the factors keeping oil high and expanding the gap between Brent and WTI.

Tuesday–U.S. Retail Sales for January 2012: in the recent report, the retail sales, when controlling for the price changes, slightly increased by 0.1%; gasoline stations sales decreased by 1.6% in December, but were 8.9% above sales in December 2010; this report could signal the changes in U.S's gasoline demand (see here my review of the recent report);

Wednesday– Minutes of recent FOMC Meeting: Following the recent FOMC announcement to extend the pledge of keeping the interest rates low until late 2014, the minutes of the meeting might provide some perspective behind this decision regarding the next steps of the FOMC;

Thursday– U.S. Producer Price Index: This report will present the progress in the PPI during January 2012, i.e. the inflation rate from producers' stand point. In the last report regarding December this index for finished goods slightly fell by 0.1% compared with November's rate but rose by 4.8% in the past 12 months; this news might affect commodities markets;

Thursday– Philly Fed Manufacturing Index: In the January survey, the Index moderately rose to +7.3. This index might affect not only the USD but also oil market (see here last report);

The upcoming report will come out on Wednesday, February 15th and will refer to the week ending on February 10th.

The EURO/USD exchange rate slightly increased during last week by 0.30%; the AUD/USD also increased by 1.32%. There are strong linear correlations among leading exchange rates (EURO/USD, AUD/USD, CAD/USD and oil prices). If the USD will further depreciate against the Euro, CAD and AUD during the week, it might also pressure up oil prices. 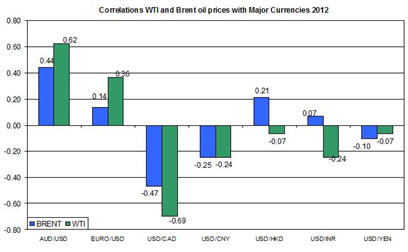 The premium of Brent over WTI continued to rise during last week. This may have been due to the high demand for heating oil in Europe because of the cold weather and the tensions between Iran and Europe. If the cold weather will continue and the tensions regarding Iran will remain high, oil prices will probably maintain their high level, and resulting in further widening the gap between Brent and WTI.

In the upcoming week there are several news items that might affect the direction of oil prices including the U.S. retail sales report, minutes of the last FOMC meeting and Philly Fed index.