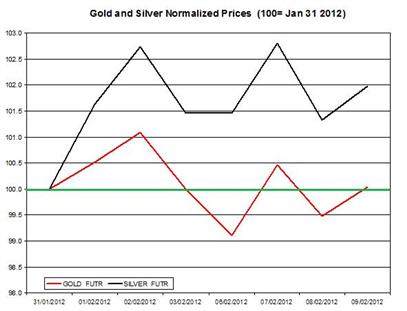 Precious metals continue to zigzag with no clear trend as they have rallied yesterday from Wednesday's falls. The news from Greece of approving the recent austerity plan didn't impress traders as the Euro only slightly rose on Thursday. ECB left the interest rate unchanged at 1%; ECB President voiced his concern over the economic outlook of EU and the debt crisis. These are many news items on today's agenda including: Great Britain PPI, Canadian Trade Balance report, U.S. Federal Budget Balance, American Trade Balance monthly report, and Bernanke's Speech. Read here more on gold and silver daily analysis for February 10th.

Gold moderately rose on Thursday by 0.57% to $1,741.2; silver also rose by a similar rate of 0.63% to $33.92. During February, gold nearly didn't rise while silver rose by 1.97%. The Euro/USD only slightly rose yesterday by 0.19% to 1.3285. If the Euro will change direction and trade down today (mainly if the recent Greek debt news will influence traders) it could indicate that metalswill follow and trade down as well.

The chart below shows the development of gold and silver during February (metals prices are normalized to 100= January 31st).

American Trade Balance: during November the goods deficit rose by $4.6 billion and reached $63.2 billion; the services surplus increased by $0.1 billion; as a result, the goods and services deficit increased during the month to $47.8 billion. If the goods deficit will rise it could indicate a rise in the demand for commodities.

U.S. Federal Budget Balance: this report indicates the government debt growth and thus may affect the U.S dollar. For December the deficit increased by $85 billion to a deficit of $321 billion for 2012;

Gold and silver continue to shift and change direction as they have been doing for the past week. On the last day of the week, it shouldn't be any different. Today's publication mainly the US trade balance and Federal budget might affect the direction of the USD and thus may also influence bullion traders.

What Are the Potential Outcomes for Silver Price in 2012?