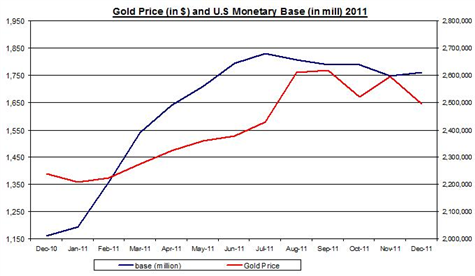 Guest Commentary: Can We Predict Price of Gold via the U.S. Money Base?

The following chart presents the development of gold and U.S. Monetary Base during 2011. According to the chart, U.S. Monetary base expanded mainly during the first half of the year due to the Fed's second Quantitative Easing Plan.

Another way to look at the relation between the monetary base and gold price is by using the U.S. gold reserves, which currently stands at 8,133.5 tonnes (or 261 million t oz.); by using the gold reserves I can calculate the "gold base price" which is U.S. Monetary base divided by U.S. gold reserves. For the December this rate reached $9,984 per t oz. compared with the actual price of gold, which was $1,644. By dividing the lagged by one period gold base with gold price we get the ratio between the two.

This relation should be taken with a grain of salt, but might offer another perspective on the future development of gold. If the upcoming U.S. Monetary base (for January) will expand again it could suggest gold will continue to rally during February.

Will the Silver and Euro Rally Continue? Are they related?

Did the Liquidity Trap Cause the Rally in Gold Price?