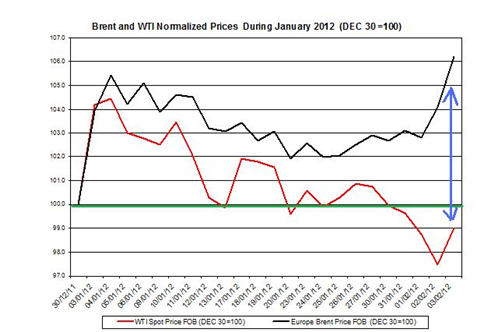 Oil prices didn't do much during last week, but there was a shift in the premium of Brent over WTI as it reached the highest level since November 2011. Will this premium continue to rise in the upcoming week? Currently, major commodities prices are falling including oil and gold (for more on gold and silver see here). Let's examine the oil market the main news items and events that may influence the direction of oil in the following week.

The difference between Brent and WTI sharply rose during last week and reached on Friday to $16.44 – the highest level since November 9th, 2011. During January the premium sharply rose by 42.06%. The recent tensions between Iran and the West including Iran's threat to close Strait of Hormuz, with nearly 20% of the world's oil is passing through it, might be responsible for the rise in the Brent premium; from the demand side, the warm weather in the U.S. and the extreme cold weather in Europe may have caused a higher growth for the demand of Brent compared with the demand for WTI.

ECB Rate Decision: last month Mario Draghi kept the rate unchanged at 1%; as of December, the Euro Area inflation rate declined to an annual rate of 2.8%. This means the low rate doesn’t seem to cause high inflation pressures (for now). If ECB will cut again interest rates it is likely to trade down the Euro;

American Trade Balance: This monthly report will present the changes in imports and exports of goods and services to and from the U.S, including crude oil; The American trade balance report for November 2011 the goods deficit rose by $4.6 billion and reached $63.2 billion; a further growth in goods deficit is likely to indicate a growth in demand for commodities;

The upcoming report will come out on Wednesday, February 8th and will refer to the week ending on February 3rd.

I speculate, if the American stock market indexes will continue to rally, this will help oil price to increase. 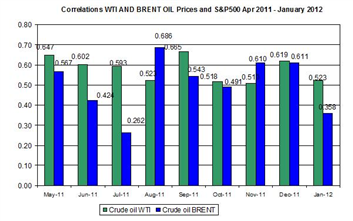 Oil prices shifted gears as the premium of Brent over WTI has risen during last week. From the demand side, the weather is probably affecting the demand for heating oil in Europe ad U.S. as stated above. If the cold weather in Europe and the relatively warm weather for the season in the U.S. will progress, this might further widen the gap between Brent and WTI. From the supply side, the tensions between Iran and EU might keep oil high, mainly Brent.