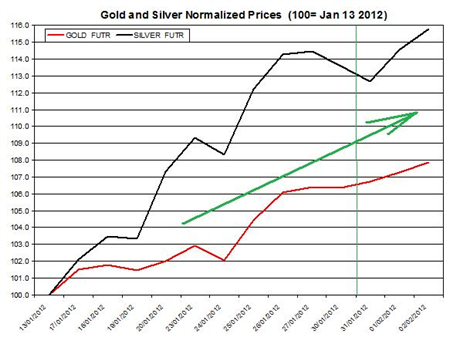 Gold and silver continued their upward trend of recent weeks as they have slightly advanced again during yesterday's trading. This rally might change direction, depending on the upcoming results of the U.S. payroll report, which will be published today; the current expectations are it will show growth in non-farm employment of 170-250 thousand. Other reports that will come out today include: Canada's employment, U.S. ISM non-manufacturing PMI and U.S. factory orders.

Read here for more on gold and silver daily analysis for February 3rd.

U.S. Non-farm Employment: (update: employment rose by 243k) during December 2011, the number of non-farm payroll employment grew by 200k; this report might affect gold and silver (see here my last review on the U.S employment report). The table below shows the correlations between the daily percent changes of metals and change in non-farm payroll. The table shows a negative linear correlation (but not significant); this finding might suggest if the employment will expand again in the upcoming report, then gold and silver might trade down.

Canada Employment Report: In the previous employment report for December 2011, unemployment slightly increased by 0.1 percent points to 7.5%; the employment rose by 18k. The upcoming report might affect the direction of CAD and consequently also affect commodities (see here the recent report);

U.S. ISM Non-Manufacturing PMI: This report will refer to January. During December this index increased (see here my review for December);

The Euro/USD didn't do much during yesterday's trading and only slightly declined by 0.12% to 1.3144; other leading rates such as cad and also slipped. The upcoming U.S. non-farm payroll report might affect the direction of the USD; if the Euro will trade up it could indicate that precious metals will also continue their rally.