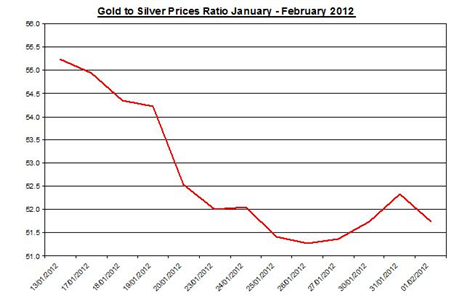 Gold and silver were traded up on the first day of the month, even though other commodities were traded down. Yesterday the Euro appreciated against the USD. Today, Ben Bernanke will testify in the House of Representatives and the U.S. unemployment claims weekly will be published. Read here ore on gold and silver daily outlook for February 2nd.

The ratio between gold and silver slightly fell on Wednesday, February 1st and reached 51.75.

U.S. Unemployment Claims: initial claims fell by 21,000 to 367,000 claims for the week ending on January 21st; the number of insured unemployment also declined by 130 thousand to 3,437 thousand on the week of January 21st; this report might affect the direction of the U.S. dollar and consequently the bullion market;

Bernanke Testifies: following last week's FOMC decision to prolong its pledge of keeping rates low until late 2014, the speculations around another stimulus plan was reignited. The Chairman of the Federal Reserve, Bernanke will address in his testimony the recent progress of U.S economy and might hint on the future plans for the FOMC; if there will be such a hint, it could influence metals traders.

Gold and silver started off February on a positive note as precious metals were trade up. But during the week so far they haven't done much and only moderately rose. I still suspect the recent charge on bullion was mostly driven by the FOMC's decision from last week. The upcoming testimony of Bernanke might shed some light on this decision and perhaps he might also reveal the future plans of the Fed including whether he considers another stimulus plan. I speculate, if there will be a hint of such sorts it could affect the direction of these metals and trade them up.