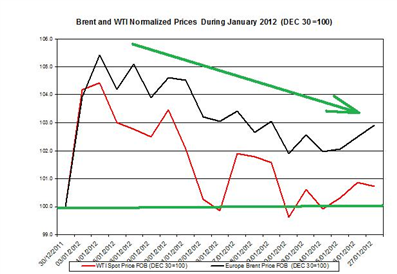 Oil slightly rose during last week and thus continued their trend of moderate changes of recent weeks. What should we expect for oil prices in February? Let's examine the oil market the main news items and events that may affect the direction of oil prices in the days to come.

In the chart below are the changes of WTI and Brent during January (prices are normalized to December 30th). 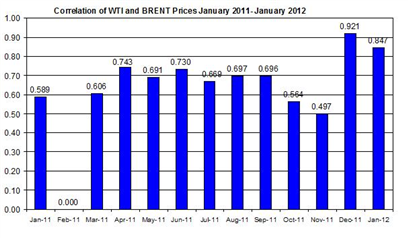 U.S. non-farm payrolls: in December, the labor market showed improvement as the number of non-farm payroll augmented by 200k (see here my last review on the U.S employment report);

The upcoming report will come out on Wednesday, February 1st and will refer to the week ending on January 27th.

The EURO/USD sharply increased during last week by 2.23%; the AUD/USD also augmented by 1.66%; I speculate the positive correlation between oil prices and EURO/USD will keep affecting the direction of oil. If the USD will further depreciate against the Euro during the week, it might also pressure up oil.

Oil prices only moderately changed during last week. I suspect there are two opposite forces that have the potential to affect the direction of oil prices: from the demand side, the negative projection of the EU countries growth rate and stability in 2012 that might affect their demand for oil. From the supply side, the tensions between Iran and the West. These two forces can pull oil in different directions. For the time being, however they don't seem to affect the oil market.