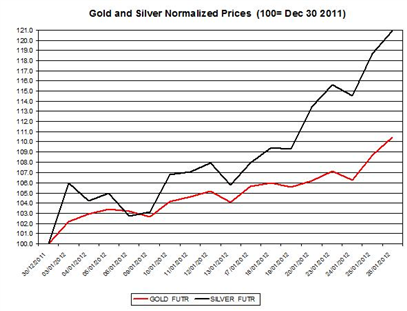 Gold and silver sharply increased for the second straight day after the FOMC announced on Wednesday it will keep the interest rates low until late 2014. Today, the U.S. GDP growth rate for q4 will be published (update: the U.S. GDP expanded by 2.8% in Q4). For the complete gold and silver daily outlook for January 27th see here in Trading NRG

U.S GDP 4Q 2011: In the third quarter the GDP grew by 1.8%, compared with 1.3% gains in the second quarter. This shows a slight rise in the growth rate for the US's GDP. Current expectations estimate the U.S. growth rate in Q4 will be slightly higher than the previous quarter's (for the final estimate of 3Q GDP).

The Euro/USD very moderately increased yesterday by 0.02% to reach 1.3108 – this was the fourth consecutive day the Euro appreciated against the USD; the Euro and AUD are strongly correlated with precious metals; thus if the Euro will continue to rise it could indicate that metals will trade up as well. 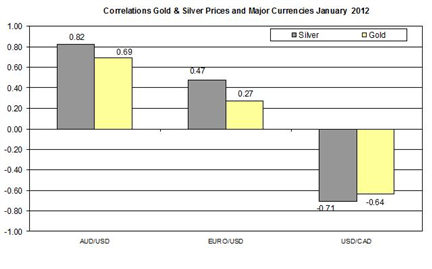 Gold and silver sharply rose in the past couple of days; this rally may have been stem, in part, by the FOMC decision to keep rates low for a longer time than the FOMC had pledged previously (until late 2014 instead of mid 2013). The recent rally of the Euro and Australian dollar may have also helped with the recovery of precious metals. The U.S GDP report may also affect trading today if it will show a dramatic change in the growth rate. On October 27th, when the first estimate of the U.S. GDP for Q3 2011 came out with a 2.5% growth rate, gold and silver sharply rose. I speculate this rally will occur again if the GDP will expand by an impressive figure.