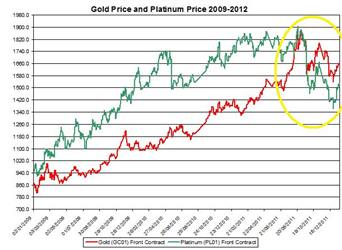 Guest Commentary: Why is Gold More Expensive than Platinum?

In recent months there has been a near paradigm shift in the precious metals market that goes against basic market analysis of supply and demand. I'm referring to the recent change in which gold became higher than platinum. This shift occurred during last October and since then has proceeded with no clear end in sight.

The chart above presents the development of gold and platinum during 2011 and 2012 up to date. It shows that during most of the year platinum was more expansive than gold; this makes sense because platinum is much less common than gold. According to several sources the worldwide supply for platinum reached in 2010 188.5 tonnes, while the global gold supply was 4,162 tonnes.

Since both metals are linked for being precious metals, it's no surprise that their linear correlation between their prices was strong and positive.

But during July/August the linear correlation changed direction and sharply fell to -0.5, i.e. a strong negative correlation between gold and platinum. This change came during the sharp rally of precious metals, when the uncertainty vis-à-vis the U.S. economy soared; this was stem, in part, due to the debate over raising the debt ceiling, and the announcement of S&P to downgrade U.S.'s credit rating. During that time when gold soared, platinum didn't react to this news in the same way and only slightly increased.

It should be noted that gold is not only a precious metal with physical demand, but also an investment for dire times; on the other hand, platinum is more considered as an industrial metal, as its main demand comes from auto-catalyst makers; therefore in economic prosperity platinum thrives, while in economic slowdown and instability gold price tends to rise.

Will this change in which gold is more expansive than platinum will continue? For the time being, it seems that the answer is yes, but once the gold bubble will burst (probably in 2013), we should see a reverse in this direction and gold will become cheaper than platinum as it once was.

For more on gold and platinum see here