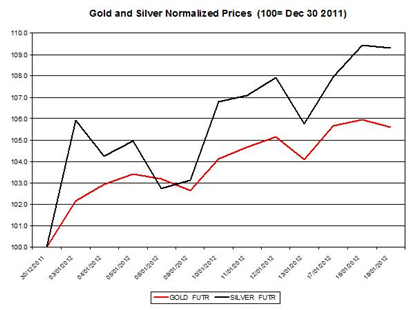 Gold and silver changed direction and after they had risen for two consecutive days, they have moderately decreased in yesterday's trading. Other commodities also traded down including oil (WTI). Yesterday the U.S. initial jobless claims sharply fell by 50k. Today, the U.S. existing home sales report will be published, and Canada's core consumer price index.

According to a recent report, privately owned Housing starts fell in by 4.1%; nevertheless, the annual rate for December 2011 was 24.9% above the December 2010.

As I have sited in the pasts, there is a supposed lagged (by one day) and negative relationbetween the development in housing starts and gold; i.e. as Housing starts annual rates falls, gold tends to increase the following day. If this relation will hold up then we should expect gold to rally today.

The Euro/USD rose again for the third straight day, yesterday by 0.82% to reach 1.2863; currently it seems that the debt auctions of France and Spain went well, as they have sold their bonds at a lower yields than anticipated. Therefore, if the Euro will further appreciate against the USD it may help rally gold and silver.

In recent months there seems to be positive linear correlations between the daily percent changes of U.S. 10 year notes yield and precious metals (during January, the linear correlations for 10 year note yields and gold and silver is 0.55 and 0.634, respectively). If the LT U.S. treasury yield will continue to rise, it may also indicate that gold and silver will tend to increase. 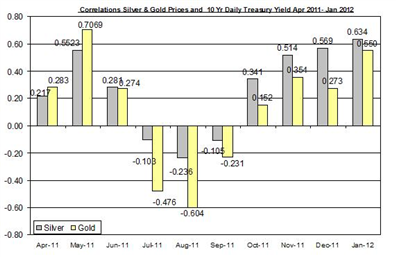 Gold and silver changed direction and slightly fell yesterday, but their general trend in January is still upward. The ongoing rally of the Euro against the USD will continue to affect commodities trading and may trade up gold and silver during the day. Finally, the upcoming U.S. existing home sales might affect the direction of gold and silver as I have presented in the past.