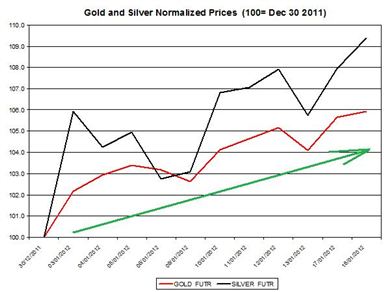 Gold and silver continued their upward trend as they have ended yesterday's trading with gains. France and Spain will commence their long term bond sales in an attempt to raise as much as €9.5 billion and €4.5 billion worth of debt, respectively. If this debt auction will go well, the Euro might trade up today. Today, the following reports will come out today: the U.S. core CPI, the ECB Monthly Bulletin, the U.S. Housing Starts and building permits report, U.S. unemployment claims, and Philly Fed manufacturing index.

U.S. Unemployment Claims:initial claims increased by 24,000 to 399,000 claims for the week ending on January 7th; the number of insured unemployment increased by 19k to 3.628 million during the week of December 30th; the upcoming report may affect commodities traders;

U.S. Housing Starts & Building Permits: the U.S Census Bureau will publish the U.S housing starts and building permits report; the housing starts figure was historically correlated with gold– as housing starts rose, gold tend to fall the following day (even when controlling to the USD effect); in the previous report, the adjusted annual rate reached 685,000 in November 2011, which is 9.3% above October's rate of 627,000; the building permits also rose in last month's report(see here the recent review);

The S&P500 rose Wednesday by 1.11% to 1,308.04 – the highest level since July 26th, 2011. Other leading indexes also rose yesterday including the Dow and NASADQ. Since the S&P500 is strongly and positively correlated to gold price and silver, if the stock market will continue to increase, this might also indicate that gold and silver will also rise. 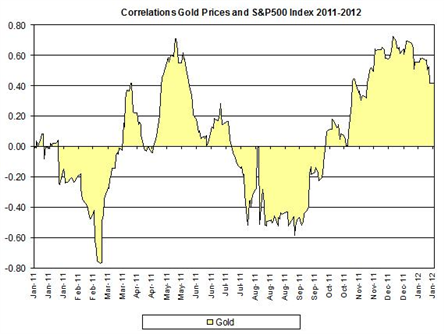 Gold and silver continued yesterday their upward trend they have demonstrated during most of January (UTD). The rally of the Euro against the USD is probably among the factors to help keep the upward trend in precious metals. If the Euro will continue this trend, it may help keep gold and silver rising during the day. Finally, the upcoming U.S. reports including the Philly Fed Survey, Housing starts, U.S. unemployment claims and U.S. CPI may adversely affect the direction ofgold and silver as I have analyzed in the past.