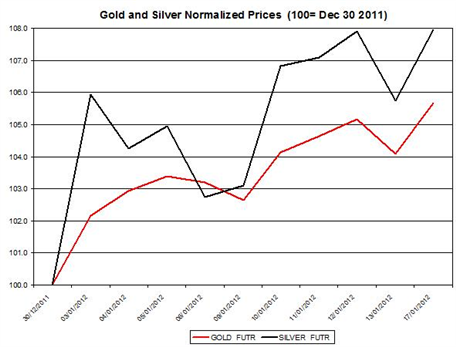 Gold and silver continue their rally and sharply increased in Tuesday's trading. France's debt auction seems to proceed well as the borrowing costs fell. Today, U.S. PPI will be published, the U.S. TIC Long Term Purchases, and Australia's unemployment rate will come out.

In the chart below are the normalized gold and silver.

U.S. PPI: This report will show the progress in the PPI during December, i.e. the inflation rate from producers' stand point. In the lastreport regarding November this index for finished goods slightly rose by 0.3% compared with October's rate and rose by 5.7% in annual terms; this news may affect gold and silver;

U.S. TIC Long Term Purchases: The Treasury InternationalCapital report will present the main changes in the purchases and sales of US long term treasuries in November 2011. In the previous report regarding October 2011, the net foreign purchases of U.S Treasuries longer-term notes increased by $4.8 billion;

The Euro/USD continues to zigzag and increased on Tuesday by 0.45 to reach 1.2737; the recent downgrade of several EU countries' credit rating didn't seem to impress forex traders as the Euro bounced back and appreciated against the USD. The current French debt auction seems to go well and may keep the Euro strong. If the Euro will appreciate against the USD it may also pressure up gold and silver.

The U.S. 10-year Treasury yield declined again on Tuesday by 0.02 percent points to 1.87% - the lowest rate this month; during January the 10 year treasury yield declined by 0.10 percent point. This downward trend might indicate that the risk appetite in the markets has subsided. Furthermore, as in the chart below, during January there seems to be positive correlations between the daily percent changes of U.S. LT notes yields and precious metals. Thus, if the LT U.S. treasury yield will continue to decline, it may also indicate that gold and silver will tend to fall. 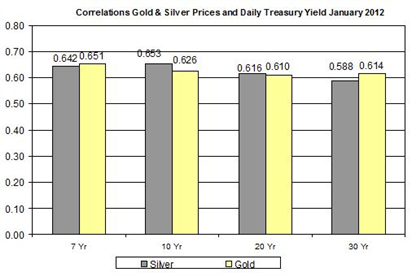 Gold and silver bounced back from Friday's fall and sharply increased yesterday. The good progress of the French auction seem to keep Euro traders positive and this is turn may have been among the factors to rally commodities including gold and silver. The rise in the American stock market also coincided with the rise of precious metals. Furthermore, if the Euro will continue to appreciate against the U.S. dollar, this may also indicate that the recent upward trend of gold and silver will progress during the day. Finally, the upcoming U.S. reports to be published today may also play a role in the direction of gold and silver as I have analyzed in the past.

By: Lior Cohen, M.A. in Economics, a commodities analyst and blogger at Trading NRG