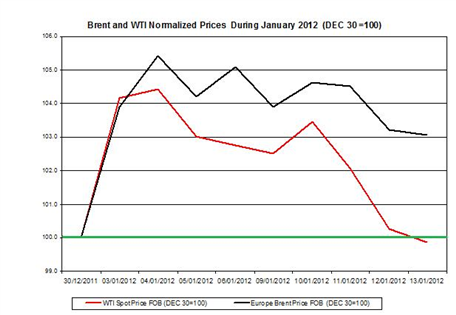 Oil prices didn't do much during last week after they had sharply inclined in the first week of the year. From the supply side, there are still growing concerns of the rising tension between Iran and the West but it has yet to reflect in the oil prices. From the demand side, the slowdown in the EU may have been among the factors in curbing the rally of oil prices. What is up ahead for oil markets in the third week of January? Let's analyze the oil market and the main news items and events that may affect oil.

The chart below shows the development of WTI and Brent during January (prices are normalized to December 30th). It shows the rise and fall of both oil prices during the past couple of weeks.

The premium of Brent over WTI continued its upward trend and reached on Friday to $12.17. Furthermore, during January the premium sharply rose by 39.09%. 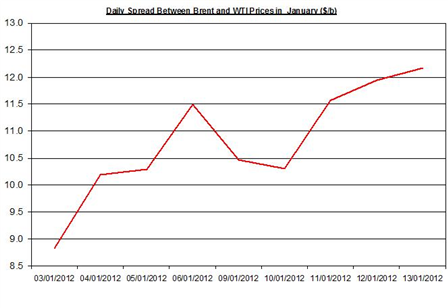 OPEC Monthly Report: this report will show the main changes in crude oil's supply and demand worldwide; the report will also analyze the changes in the production of OPEC countries during December; the recent changes in oil prices might be stem, in part, from the changes in OPEC's oil production; (See here a summary of the last December report);

China Fourth quarter GDP: during the third quarter of 2011, China grew by 9.1% in annual terms; the current expectations are that the Q4 2011 grew in annul terms by 9.3%; if the growth rate will be lower it might have an adverse effect on crude oil prices;

U.S. Producer Price Index: This report will show the progress in the PPI during December, i.e. the inflation rate from producers' stand point. In the last report regarding November this index for finished goods slightly rose by 0.3% (m-o-m); this news may affect gold and silver prices;

IEA monthly oil report: this upcoming report will present an updated (as of December) outlook and analysis for the global crude oil market for 2012 and 2013 (See here a summary of the previous report);

Philly Fed Manufacturing Index: This monthly survey provides an indicator for the economic growth of the US economy as it measures the manufacturing conditions of the US. In the December survey, the Philly Fed report showed the growth rate moderately rose to +10.3 in November. If this index will continue to rise it may positively affect crude oil prices (see here last report);

The upcoming report will be published on Wednesday, January 18th and will refer to the week ending on January 13th.

The EURO/USD zigzagged during last week but eventually by the end of the week it had declined by 0.29%, while AUD/USD rose by 0.92%; the positive relation between oil prices and Euro/USD may have be among the factors to drag down oil prices during last week. If the USD will further strengthen against the Euro and Australian dollar during the upcoming week, it may affect the direction of oil.

During the upcoming week there are many news items that might affect the financial markets and consequently also the oil market including the Chinese GDP growth rate and Philly Fed Index. The economic turmoil in EU will continue to be a key factor in affecting people's estimation of the future demand for crude oil in EU. From the supply side the upcoming OPEC report will shed some light on the changes in the oil production in OPEC countries. Furthermore, the concerns revolving Iran may affect the market if there will be breaking news from this region. Finally, if the major exchange rates including EURO and AUD will appreciate against the U.S. dollar, they may help the rally of oil prices and even reverse the recent downward trend.