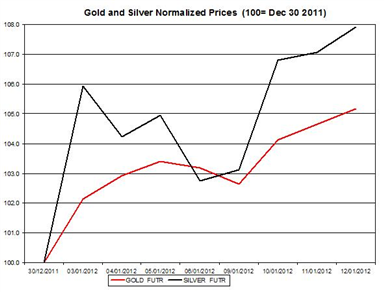 Gold and silver continued their upward trend of the past couple of weeks. Yesterday the ECB decided to keep interest rates unchanged which in turn may have helped keep the Euro strong against the US dollar. But in today's news the concern of France's credit rating downgrade by S&P may have been among the key factors in pulling down the Euro and the commodities markets along with it. Today, Great Britain's PPI Input report will be published, America's trade balance report and Canada's trade balance report.

Despite the sharp changes in gold and silver during January, their linear correlation is still strong as indicated in the chart below. 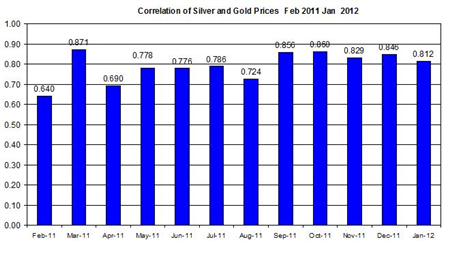 As expected the European Central Bank kept the basic interest rate at 1.00% after ECB had cut the rate in twice in the last two rate decisions. President of ECB, Mario Draghi continues to call for structural reforms in EU countries.

This news may have been among the factors to trade up the Euro against the U.S. dollar and consequently keep major commodities prices rising.

In December, the U.S. retail and food sales reached $400.6 billion, which is 0.1% above the sales in November and 6.5% above December 2010. This news shows that the U.S. economy continues to expand.

According to the recent weekly update on the U.S. initial jobless claims rose by 24,000 for the week ending on January 7th to 399,000 claims (seasonally adjusted data); the number of insured unemployment reached 3.628 million, an increase of 19,000 compared with the previous week’s figure. This news may have pressured down the USD against other currencies.

American Trade Balance: This report will present the changes in imports and exports of goods and services to and from the U.S; during October, the American trade balance report showed that the goods deficit decreased by $0.7 billion compared with September 2011 and reached $58.8 billion; the service surplus remained virtually unchanged at $15.8 billion; as a result, the goods and services deficit declined during the month to $43.5 billion.

The Euro/USD changed direction again and rose on Thursday by 0.86% to reach 1.2815; the recent ECB rate decision may have helped keep the Euro from falling against the USD in yesterday's trading. Furthermore, during yesterday the AUD also appreciated against the USD. If this trend will change direction it might also affect gold and silver to fall.

Gold and silver continued their upward and this trend might shift towards a fall if the Euro and AUD will trade down against the USD, and the U.S. Long Term securities yields will remain low. The upcoming U.S. report - the trade balance may also affect the forex trading and consequently gold and silver.