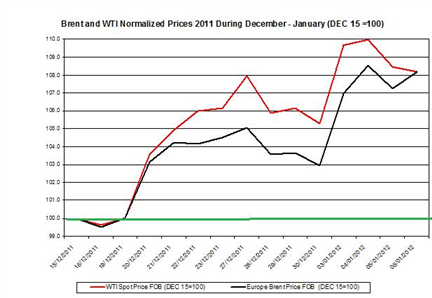 Oil prices started off the month of January with sharp gains mainly during the first couple of days of the year. Will this upward trend continue? For the second week of January, let's examine what is up ahead for the oil market.

The premium of Brent WTI changed direction and recent few days it had incline and reached on Friday to $11.50. Furthermore, during January the premium sharply rose by 31.43%. 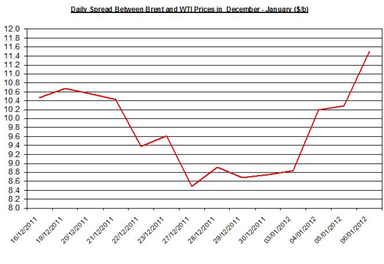 German Industrial Production: this report will present the growth during November of Germany's industrial production and could indicate the progress of the German Economy and consequently may influence commodities traders;

China's Trade Balance: according to Reuters China's trade surplus will reach a four month high of $21.6 billion, but during 2011 China's surplus has shrunk to $160 billion; if this trend will continue it could indicate that China's economic growth is slowing down, and thus may affect the crude oil market;

U.S. Retail Sales: this report will present the monthly changes in the retail sales and food services during December; in the recent November report, the retail sales, when controlling for the price changes, slightly rose by 0.2% from the previous month; gasoline stations sales decreased by 0.1% in November; this report could indicate the changes in U.S's gasoline demand (see here my review of the recent report).

American Trade Balance: the upcoming monthly report for November will present the changes in U.S imports and exports of goods and services; The American trade balance report for October the goods deficit decreased by $0.7 billion compared with September and reached $58.8 billion; the service surplus remained virtually unchanged at $15.8 billion; as a result, the goods and services deficit declined during the month to $43.5 billion.

The EURO/USD continued its downward trend and declined by 1.88%, while AUD/USD only moderately rose by 0.19%; the positive relation between oil prices and Euro/ USD might have be among the factors to pull down oil during the second part of last week. If the U.S dollar will further strengthen against the Euro and Australian dollar during the upcoming week, it may affect the direction of oil.

If the American stock market indexes will continue to rally during the second week of January, this may also push up oil prices. 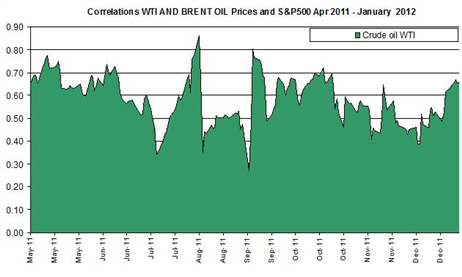 Oil prices rallied in recent weeks and sharply inclined at the first few business days of January. This may have been due to the positive U.S. reports (U.S. PMI Manufacturing) and the "January effect" that helped rally not only American stock markets, but also oil. In the second week of the January there are many news items that could affect the financial markets and consequently also the crude oil market; if the U.S. reports mainly the American retail sales reports and trade balance report will show an improvement this will signal a growth in the U.S. economy that might positively affect the American stock market and along with it the crude oil market. The Chinese and German reports may also play a role in the crude oil market if they will present a sharp change. The tension between Iran and the West will likely to keep oil prices high. Finally, if the major exchange rates including EURO will depreciate against the USD (there is a rate decision by ECB on Thursday), they may curb the rally of oil prices and even reverse the recent upward trend.