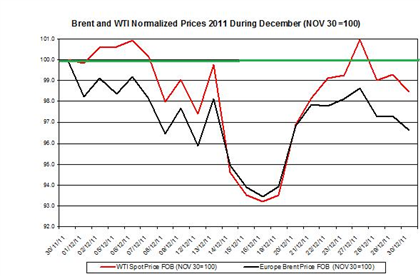 Oil prices slightly declined during the last week of 2011, but this week we are entering a new year and the direction of oil prices may change. For the first week of 2012, let's examine what is up ahead for the oil market.

The chart below presents the development of WTI and Brent during the month (prices are normalized to November 30th). It shows the decline and rise of both oil prices during the month.

The premium of Brent over WTI continued to decline during most of last week and reached on Friday to $8.75. Furthermore, during December the premium sharply decreased by 20.16%. 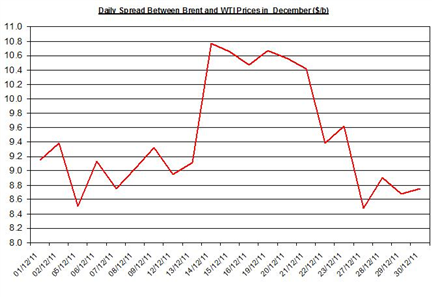 U.S. ISM Manufacturing PMI: This report will present the monthly change in manufacturing sector on a national level for December 2011. During November the index sharply rose to 52.7% a 1.9 percent point increase compared to October's index; this index might affect crude oil markets (see here my review of last report);

U.S. Factory Orders: This monthly report will examine the changes in U.S. factory orders of manufactured durable goods during November. This report may indirectly signal the changes in U.S. demand for commodities such as crude oil. According to the recent flash report, during November new orders of manufactured durable goods increased by $7.5 billion or 3.8% to $207.0 billion (for the full report);

U.S. Non-farm Employment Report: in the December report regarding November, the labor market continues to rally as the number of non-farm payroll employment rose by 120k; the U.S unemployment rate slipped to 8.6%. This report could affect commodities (see my last review on the U.S labor report).

The EURO/USD continued its downward tend during last week of 2011 and declined by 0.64%, while AUD/USD fell by 0.56%; the strong relation between oil prices and AUD/ USD might have be among the factors to pull down oil prices. If the USD will further strengthen against the Euro and AUD during the upcoming week, it may affect crude oil to trade down.

If the American stock market indexes will rally during the week and recover from the falls during the last week of December, this may also push up oil prices. 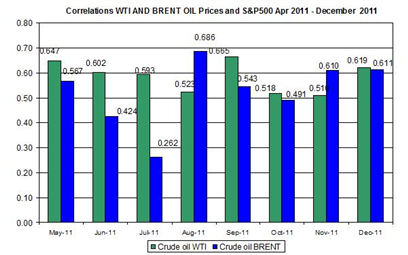 Oil prices made a comeback during the second part of December, after they had declined during the first couple of weeks of December.

In the first week of the year there are many news items that could affect the financial markets and consequently also the crude oil market; if the U.S. reports will be positive including the U.S. non-farm labor report, they might positively affect the American stock market and along with it the crude oil market. There might also be a "January effect", which could push up not only American stock markets, but also oil. On the other hand, if the major exchange rates such as AUD and CAD will depreciate against the U.S. dollar, they may curb the rally of oil.