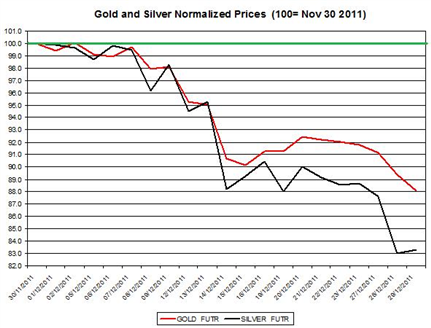 Gold continued to decline yesterday, while silver changed direction and slightly rose yesterday. Both precious metals didn't do well in recent weeks, but what is up ahead for gold and silver on the last business day of 2011? Will there be a correction to the recent downward trend of precious metals? Today, China's Manufacturing PMI report will be published.

Gold sharply fell on Thursday by 1.48% to $1,540.9; gold has fell for the past six consecutive business days; silver on the other hand slightly rose by 0.30% to reach $27.32. The chart below presents the development of gold and silver during December. During December gold decreased by 12% and silver by 16.7%.

The ratio between gold and silver slightly declined on Thursday, December 28th and reached 56.41. During the month the ratio gained 5.7% as gold has outperformed silver. 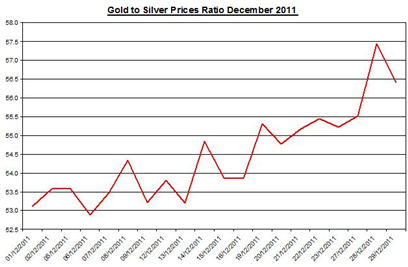 Despite the different directions of gold and silver recorded yesterday, their linear correlation between their daily percent changes continues to be high in December as it was in previous months. 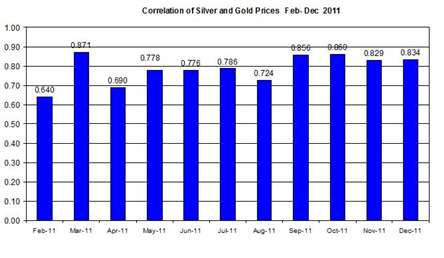 According to the last U.S. pending homes sales report the market continues to rally as the pending home sales index rose by 7.3% in November. This servers as another indicators to the economic progress of the U.S. real estate markets and thus may have helped trade down precious metals.

Yesterday, December 29th, according to the recent U.S. jobless claims report, the initial claims rose of 15,000 for the week ending on December 24th; the total initial claims reached 381,000 claims (seasonally adjusted data). This news may have affected the currency trading during yesterday and curbed the appreciation of the USD.

The Euro/USD slightly rose on Thursday by 15% to reach 1.2961. Furthermore, other exchange rates such as the AUD/USD also moderately rose. If major currencies will appreciate against the USD, it may also affect gold and silver to rise.

Gold and silver didn't do well in December and more so in the past several days. The recent U.S unemployment claims may have helped curb the recent appreciation of the USD and thus also curbed the sharp drop in gold and silver.

As we are existing 2011, unless the USD will trade down against other currencies such as the Euro, or a sharp move by speculators to correct the recent drop in gold, I speculate it is likely that bullion prices' downward trend will continue.

Where are Gold and Silver Headed in 2012?

Get the recent gold and silver outlook report for free! Just sign up to TradingNRG's newsletter.