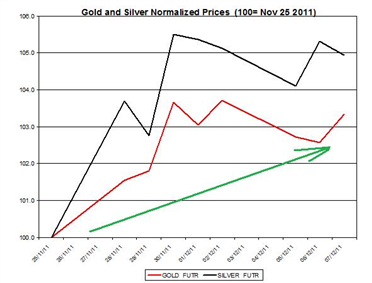 Gold and silver continued to seek direction in the past few days as is the case for other commodities and forex markets. Today, European Central Bank will decide on its interest rates (update: ECB cut the rate by 0.25% to 1.00%), the U.S. Department of Labor will present the weekly change in unemployment claims and China's inflation rate will be published.

The ratio between gold and silver slightly inclined on Wednesday, December 7th to 53.48. During the month the ratio slightly rose by 0.2% as gold slightly outperformed silver.

ECB Rate Decision: In the previous ECB rate decision the interest rate was cut by 0.25 percent point to 1.25%. The Euro Area didn't grow much and might enter into a deeper economic slowdown. ECB might want to fight this slowdown and ease the liquidity problems of EU banks by reducing the rates today by another 0.25%;

U.S. Unemployment Claims:initial claims inclined by 6,000 to 402,000 claims for the week ending on November 26th; the number of insured unemployment inclined by 35k to 3.740 million during the week of November 19th;

Chinese Inflation: in October, the Chinese inflation rate declined compared with September's CPI and reached an annual rate of 5.5% (it was 6.1% in September); this rate is still above the China's inflation target of 4% in annual terms. But the sharp drop in the inflation rate is probably an indication of the effect of the steps taken by the People Bank of China's to curb the inflation pressures;

The Euro/USD slightly increased again yesterday by 0.07% to 1.3411. Other currencies also appreciated against the USD; this rally is probably among the reasons for the gains recorded yesterday to gold. If the Euro and AUD will change direction today and decline it may drag down gold and silver throughout the day.

Gold and silver continue to zigzag on a daily basis even though in the past couple of weeks both precious metals have shown an upward trend. The upcoming ECB interest rate decision and tomorrow's EU summit in Brussels will probably affect the forex markets and consequently also affect gold and silver. If the ECB will further cut down the interest rates it could strengthen the Euro against the USD as was the case back in November, as this decision will regain traders' confidence in the Euro and consequently might also pressure up gold and silver. On the other hand, some predict that reducing the rate will pressure gold price to decline.

About the Author: Lior Cohen, M.A in Economics, a commodities analyst and blogger at Trading NRG.