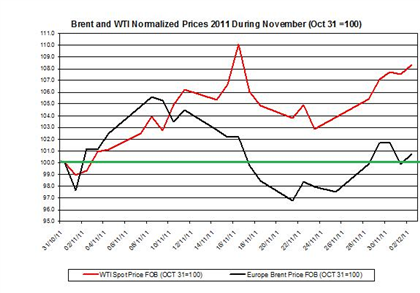 Oil prices finished the week on a positive note along with the rest of the markets such as the American stock markets. The positive reports that were in published in the U.S. during last week including the U.S. labor report and U.S consumer confidence survey may have helped push up the markets including the oil market. The recent development vis-à-vis the sanctions on Iran may also affect the oil market in the weeks to come. There are several reports that will be published during the upcoming week that may affect not only the stock and forex markets, but also energy markets including: U.S. trade balance report, ECB rate decision, China's inflation rate and EU summit.

The chart below shows the development of WTI and Brent during November (prices are normalized to October 31st).

Premium of Brent over WTI –Update

The premium of Brent over WTI slightly declined during last week and reached on Friday to $9.39. During November the premium fell by 32.88%. 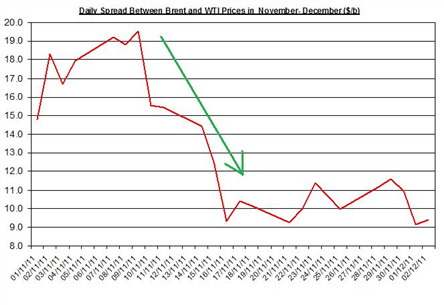 In a recent post I refer to the change in the difference of Brent oil and WTI oil price.

The EURO/USD slightly inclined during last week by 0.5%; this upward trend breaks the depreciation of the Euro against the USD in recent weeks; the same goes to other currencies. If the USD will continue to depreciate against the Euro, this may also affect oil to trade up.

If the American stock markets will continue to rally as they did during last week, this upward trend might also pressure oil prices to rise. 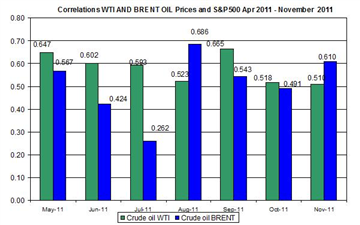 Oil ended last week rising. The recent development in the Middle East may continue to play a role in the development in oil prices and if there will be new speculations or developments of another escalation in the region mainly Iran, this could pressure oil to rise. On the other hand from the demand side, the recent positive reports from the U.S. including the positive labor report, the manufacturing PMI, the consumer confidence survey and the pending home sales report helped rally the markets including the stock markets and consequently also helped push up oil prices.

If the U.S. will continue to show improvement and the EU countries will also start to show growth, this could also help oil to rise.

The forex market will probably continue affecting the development of oil as analyzed above.