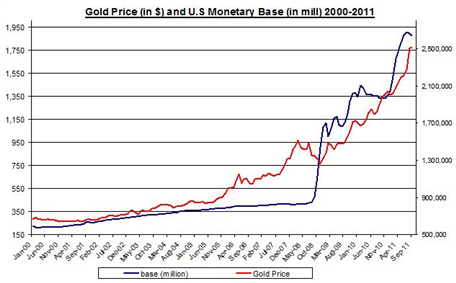 Guest Commentary: Did the Liquidity Trap Cause the Hike in Gold Price?

Did the Liquidity Trap Cause the Hike in Gold Price?

I have stumbled upon an interesting article by Paul Krugman, a Nobel laureate in economics; the article offers an explanation for the hike in gold in the last few years. Krugman, who considers himself a deflationista, i.e. a person who believes the U.S. is currently in a liquidity trap, thinks that the gains in the gold is another confirmation that we are at a liquidity trap: basically in a liquidity trap people and businesses "sit on their money" and even if the interest rates plunge to zero (and the U.S. interest rate has been at zero for the past couple of years), investors are still reluctant to invest their funds. It's hard to prove that we are in a liquidity trap because even if the rates are low and economy is slowing down, there is still no evidence of deflation, especially after the recent CPI report showed that the U.S. inflation rate stands at 3.9% in annual terms. But let’s not nitpick and accept this analysis. So how this economic situation explains the gains in gold price?

According to Krugman, people are holding on to exhaustible resources such as gold and put off the usage of said resources into the future in times when the interest rates are low. In other words, since people don't receive good returns on their investments due to low interest rates, and the liquidity trap means people are sitting on funds, therefore investors have an incentive to hoard gold and put off the consumption of gold to the future.

This also means that the expectations of inflation weren't the cause of the spike in the gold. The problem is that the spike in gold came especially after the recent two QE plans the Federal Reserve implemented in 2008 and 2010.

The chart below shows the development of gold price and U.S. Monetary Base during the recent decade (between 2000 and 2011). It shows the two spikes in the Monetary Base in 2008 and 2010 after the Fed issued QE1 and QE2, respectively.

The sharp gains in gold came during that time when people may have expected there will be a rise in inflation or perhaps they felt the USD will sharply depreciate against other currencies.

This chart alone puts a small hole in Krugman's theory, even if it is compelling. The chart could mean that many people horded gold due to expectations of inflation pressures that up to now don't seem to occur.

But Krugman's theory also means that if we are in a liquidity trap, then gold shouldn't sharply rise in the near future as it did in the past couple of years. So that if you are persuaded by this theory, then the hike in gold is over and should only moderately incline in the near future. If you don't accept this theory, then there is a good chance of additional hikes in gold if and when there will be signs of inflation or an additional expansion of the U.S. Monetary Base (i.e. QE3).

5 reasons for QE3 and 3 against – opinion