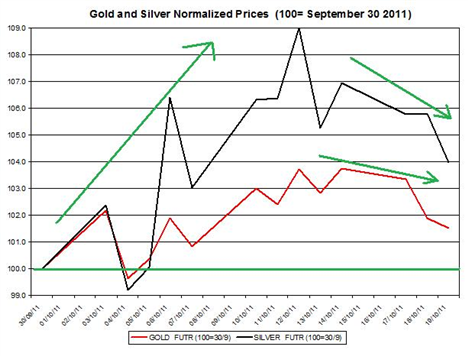 Gold and silver ended the trading yesterday slipping again along with other major commodities and the stock markets; some consider the recent liquidity problems in Europe may have helped pull down the commodities market including gold. Today, U.S. Jobless claims report will be published; the U.S. existing home sales, and the Philly Fed Manufacturing Index.

Gold and silver continue to move in the same direction as their linear correlation remains high and positive. 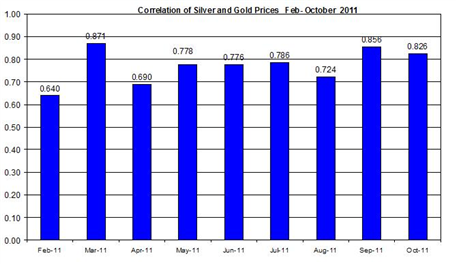 U.S. Jobless Claims:initial claims slipped by 1,000 to 404,000 claims for the week ending on October 8th; the number of insured unemployment reached 3.724 million, a decrease of 21,500 during the week of October 1st; this report could affect commodities traders;

U.S. Existing Home Sales: This report will show the major changes in U.S. existing home sales during September 2011; in August the number of homes sold inclined by 7.7% (see here the recent review);

Philly Fed Manufacturing Index: This survey provides an indicator for the economic progress of the US economy as it measures the manufacturing conditions of the US. In September, the index inclined from -30.7 in August to -17.5 in September. This index may affect not only the USD but also gold and silver (see here last report);

Some speculate that the recent slump in commodities including gold and silver is driven by liquidity problem many European banks are facing as they trade their holdings in precious metals to boost their capital buffer. If this analysis has merit it may partially explain the recent drop in commodities and could also have additional ramifications in the short term.

On the other hand, the recent review in Bloomberg suggests that silver is likely to make a comeback on high demand for this precious metal in China.

The U.S inflation for September 2011 rose by 0.3% or in annual terms by 3.9%. The CPI without food and energy also rose by only 0.1% during September and 2% in the past twelve months. This news may have slightly affected the trading of forex and commodities markets. The bigger news came from the housing market:

During September privately owned housing starts sharply inclined in to a seasonally adjusted annual rate of 658,000 a 15.0% increase.

On the other hand the seasonally adjusted annual rate of building permits for privately owned housing reached in September 594,000 – a 5.0% decrease. The news of the housing starts may have curbed some of the falls on Wall Street, but the panic regarding the European debt crisis continues to affect more than other news the shifts in the financial markets.

Gold and silver fell along with other major commodities but they still are above their initial price level from the beginning of the month. The speculation around the ramifications of the European debt crisis moves the markets in different direction nearly on daily basis. The upcoming news form the U.S. including the Philly Fed Manufacturing Index and Existing Home Sales may pull up the markets if they will present above than expected results. On the other hand, moderate changes in either way may not have much effect on gold and silver. Thus, the speculation around the European debt crisis is likely to continue affecting the financial markets including precious metals over slight changes in the US economy's indicators.

For further reading:Gold and Silver Prices Monthly Outlook for October 2011