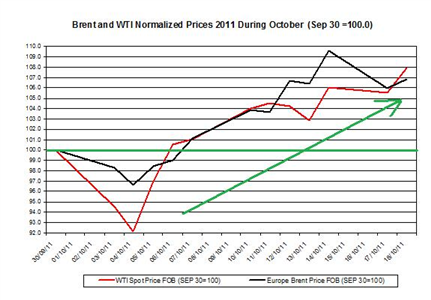 Oil prices changed direction again and bounced back from the falls they had recorded on Monday. The rally in the American and European stock markets may have contributed to this rally. Today, U.S. Consumer Price Index will be published; the U.S. building permits and housing starts, and the EIA oil stockpiles report.

The chart below presents the prices development of WTI and Brent during October (normalized prices Sept 30=100).

The premium of Brent over WTI fell on Tuesday to $24.34. During October the premium inclined by 3.35%. 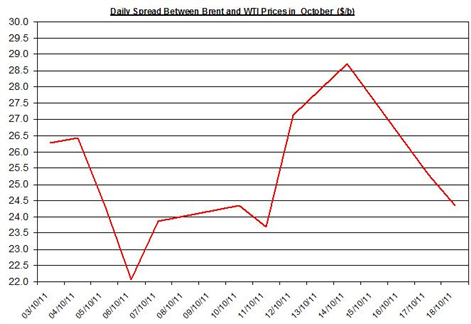 The U.S producer price index sharp increase in September by 0.8%; the energy index is one of the prime factors that rose in September by 2.3%, the Producer Price index excluding food and energy slightly increased by 0.2%. This index serves as a good indictor for the upcoming U.S CPI to be published today.

U.S CPI: This monthly report will show the main changes in the consumer price index during September. According to the US Bureau of Labor statistics for August 2011, the CPI inclined by 0.4% and over the last 12 months by 3.8%. The core CPI inclined in August by 0.2%;

U.S. Building Permits & Housing Starts Report: The recent report showed an improvement in the building permits during August 2011, while the adjusted annual rate for housing starts fell during the month (see here the recent review);

The AUD/USD inclined on Tuesday by 1.03%. Furthermore, the USD also slightly depreciated against the CAD. The speculation around the European crisis continues to influence forex and commodities traders. If the USD will depreciate against the risk currencies (AUD, CAD) as it in most of October, this may also affect oil prices to increase. 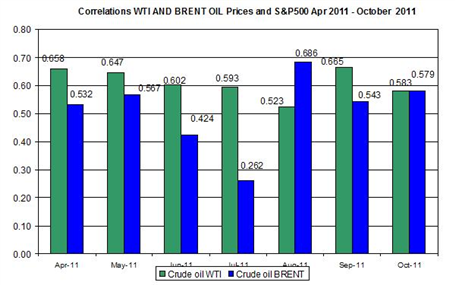 The recent rally of the American stock markets in recent weeks seems to have contributed to the rally of oil.

According to a recent report by Goldman Sachs, their analysts project an improvement in Europe's economic outlook along with a drop in crude oil stockpiles may push Brent back up. The upcoming U.S. CPI and oil stocks may affect WTI during the day. But more than other fundamental factors the effect of the stock market seems to be among the main factors affecting oil prices. The speculation revolving the next step of the Euro leaders in resolving the debt crisis will continue to influence the financial markets including oil market. I still speculate that during the week WTI will settle around $85-$92 mark and Brent around $108-$115.