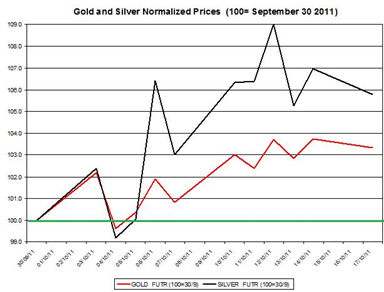 Gold and silver started the week with moderate falls as speculation over the next step of the European leaders is not clear. The Chinese economy grew in the third quarter by a slower than expected pace. Currently gold and silver prices are traded down. Today, U.S. Producer Price Index will be published; the U.S. TIC Long Term Purchases report and the Chairman of the Fed will give a speech.

The ratio between gold and silver increased on Monday, October 17th to 52.69. During October, silver inclined by a slightly larger rate than gold as the ratio decreased by 2.3%. 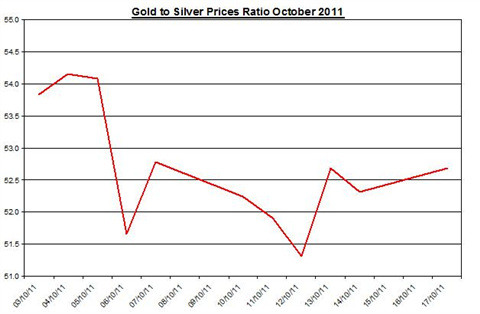 Following the G-20 meeting over the weekend, as it was agreed that the European leaders will need to reach an agreement on a plan to ward off the current European debt crisis by next Monday was met with some resistance: there are speculations that Germany won't resolve the current crisis until Monday, according to sources close the Merkel;

As the same issue, there are speculations that if the EFTS fund will be augmented to &euro;2 trillion this could also adversely affect France's credit rating (AAA) as this move will increase its liability. This recent information/speculation may have been among the factors that curbed the recent gains in the stock and commodities markets.

The GDP of China increased in the third quarter by 2.3% (Q-2-Q), or in annual terms by 9.1%. This is a drop in the growth rate from the previous quarter as the GDP grew by 9.7% and 9.5% in the first and second quarters (in annul terms), respectively. This news may have been among the factors that contributed to yesterday's falls in the commodities and stock markets.

U.S. Producer Price Index: This report will show the progress in the PPI during September. In the previous report regarding August, this index for finished goods remained flat, after an increase in 0.2% in July; this news could have an effect on gold and silver;

Bernanke Speaks: following last month's announcement of FOMC plan to purchase LT securities and to sell ST securities to conclude by June 2012, the Chairman of the Federal Reserve is likely to address the economic outlook of the FOMC and his speech may affect forex and commodities traders if he will hint of another stimulus plan in the horizon for the FOMC;

The Euro/USD declined on Monday by 1.04% to reach 1.3737; other currencies also fell against the USD including the CAD and AUD. If the "risk currencies" (AUD and CAD) will keep on falling today, they could also curb the progress of gold and silver during the day.

Gold and silver continue their fall they have started yesterday, despite the upward trend these metals have had during most of October. The recent news from China and the rumors from Europe may have contributed to the recent drop in commodities prices. The speculation over the next steps of Euro leaders will continue to stir up the markets and may push gold and silver in different directions throughout the week with no clear trend.