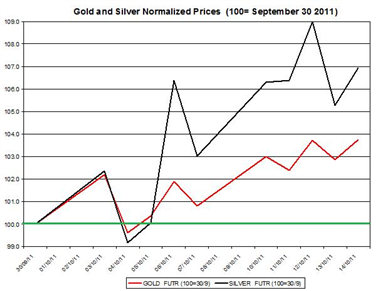 Gold and silver continue to slowly incline even if they zigzag along the way up. The recent rally in the American and European stock markets as some of the confidence among traders was restored even for a short while may have helped the rally of major commodities including gold, silver and crude oil. Today, Australia's Central Bank will publish the minutes of the recent monetary policy meeting, and China' GDP for Q3 2011 will be published.

The recent slow paced upward trend in gold and silver brought down the volatility of these commodities from the record high levels they have reached in September. The standard deviation of the daily percent changes of gold and silver slipped in October from September.

G-20 Meeting over the Weekend

The G-20 meeting that was held in Paris over the weekend concluded to endorse a plan to avoid a Greek default. The members of the G-20 and central banks scheduled a summit of the European leaders as a deadline for coming up with this plan. The details are still not completely clear and until there will be a signed agreement among the countries, it's hard to jump into conclusions. Some analysts even speculate that Britain may also contribute to the &euro;2 trillion international rescue fund. In any case this news already caused a reaction in the markets as they sharply inclined on Friday and may continue to do so over the week.

The U.S. retail sales showed that during September sales grew by 1.1% compared with August's sales. This news may have helped the financial markets rally over the last day of the week.

China Third quarter GDP: during the second quarter of 2011, China grew by 9.5% in annual terms; the current expectations are that the Q3 2011 grew in yearly terms by 9.2%; this slowdown is probably due to the recent raises in the interest rate and loans restrictions by the People Bank of China;

The Euro/USD inclined on Friday by 0.75% to reach 1.3882; other currencies also rallied against the USD including the CAD and AUD. If the "risk currencies" (AUD and CAD) will keep on rising today, they could also assist the progress of gold and silver to incline during the day.

Gold and silver changed direction but also move in a slow paced upward trend. The speculation over the next steps of G20 policymakers in containing the European debt crisis already affected the financial markets. This rally is likely to hit not only the US stock markets but also major commodities including gold and silver.