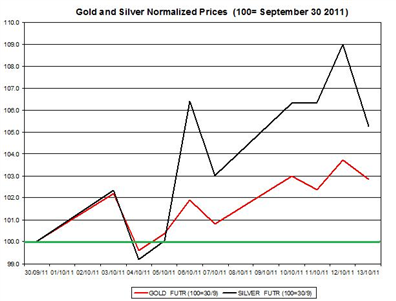 Gold and silver continue to zigzag as they have changed direction yesterday and slipped along with the rest of the financial markets including the US stock markets. Currently gold and silver changed direction again and are traded slightly up. Today, U.S. Federal Budget Balance will be published the U.S. retail sales and the Euro Area Consumer price index. The G20 meeting will be held this weekend.

The ratio between gold and silver increased on Thursday, October 13th to 52.69. During October, silver inclined by a slightly larger rate than gold as the ratio decreased by 2.3%.

Euro Area CPI (September): In the last report regarding August 2011, the annual inflation rate was 2.5%, but the flash report for September showed an increase in CPI to 3%, which could be among the key factors that affect the recent ECB decision to leave the rate unchanged;

U.S. Retail Sales Report: during August, the retail sales, when controlling for the price changes, slightly rose by 0.5% from the previous month; this report could indicate the changes in U.S demand for commodities (see here my review of the recent report).

U.S. Federal Budget Balance for September: this upcoming publication will show the changes in the US federal balance for September 2011; this report indicates the government debt growth and thus may affect the USD. In the previous report, the US's government deficit reached in August $134 billion – nearly $4.8 billion increase (See here a summary of the recent report);

G20 Meeting: in this meeting the financial ministers of the G20 countries will discuss the current European debt crisis and the global economic slowdown.

The AUD/USD slightly inclined on Thursday by 0.33% to reach 1.0192; other currencies had a mixed trend with the CAD and Euro falling against the USD and the GBP and YEN rising. If the "risk currencies" (AUD and CAD) will rise today they could also assist the progress of gold and silver to increase during the day.

The U.S. 10-year Treasury yield changed direction as well and fell yesterday by 0.05 percent points to 2.19%; during October the 10 year treasury yield rose by 0.27 percent point. This change might just be a correction or a shift in direction. If it's the latter, then it may help the rally of gold.

Gold and silver changed direction again and fell yesterday, despite the upward trend they have had during October. This zigzag is probably part of the uncertainty in the markets in regards to the direction of the financial markets. The upcoming US retails sales report and the US budget might shed some light in regards to the economic condition of the American economy. Furthermore, if the G20 meeting over the weekend will bring some substantial headlines it could ease the uncertainty in the markets and curb the rally of gold and silver prices. But since these meeting seldom bring big headlines, it is likely that gold and silver will keep their slow comeback and increase.