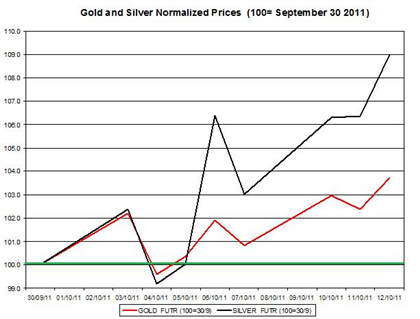 Gold and silver renewed yesterday their upward trend and sharply inclined as major currencies traded up against the US dollar. Currently gold and silver are traded down. Yesterday the minutes of the last FOMC meeting was published and showed the negative analysis of the FOMC of the US economic outlook. Today, there are many reports to be published including U.S. Unemployment Claims report, Canadian Trade Balance, American Trade Balance and U.S. Federal Budget Balance.

The ratio between gold and silver slightly declined again on Wednesday, October 12th to 51.32. During October, silver inclined by a slightly larger rate than gold as the ratio decreased by 4.8%. 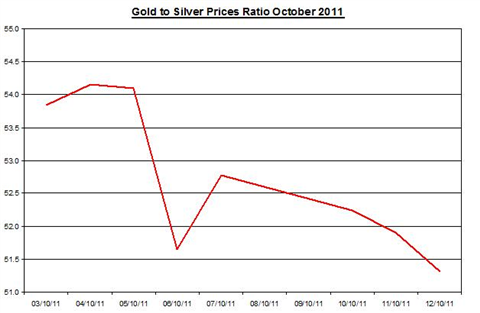 U.S. Unemployment Claims: Following the recent U.S. labor report, for the week ending on September 30th, initial claims inclined by 6,000 to 401,000 claims; for the week of September 24th, the number of insured unemployment was 3.700 million, a decrease of 52,000 compared with the previous week’s; this report could affect gold and silver traders;

U.S. Federal Budget Balance: this upcoming publication will show the changes in the US federal balance for September 2011; this report indicates the government debt growth and thus may affect the USD. In the previous report, the US government deficit reached in August $134 billion – nearly $4.8 billion increase from the $129 billion deficit recorded in July 2011(See here a summary of the recent report);

The FOMC's staff continued to express their concerns regarding the economic progress of the US economy and predicted that the job market will remain high and the GDP will only grow gradually in the short-medium term. The members of the committee didn't rule out additional stimulus steps in the future. Three members voted against this plan. This shows that Bernanke felt comfortable in approving this "twist plan" without a unanimous vote.

The Euro/USD sharply inclined on Wednesday by 1.11% to reach 1.3792; other currencies also followed and sharply gained against the USD including the CAD and AUD. If these currencies (EUROS, AUD and CAD) will change direction and fall today they could also curb the progress of gold and silver throughout the day.

Gold and silver sharply inclined yesterday again over the weak US dollar, but currently the bullion prices are slipping. The upcoming American reports regarding unemployment claims and trade balance may affect forex market consequently the gold and silver markets as well. But the current sentiment in the market continues to keep the uncertainty high and therefore I still speculate that gold and silver will keep their slow comeback unless there will be breaking new developments regarding the European debt crisis.