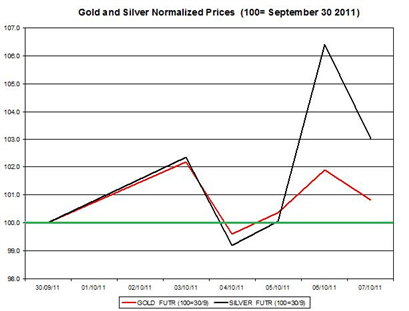 Gold and silver changed direction again and slightly slipped on the last day of last week, after the U.S. non-farm employment report showed an increase of 103k in employment during September. Currently, gold and silver are traded up. The speculation around the European debt crisis continues to be high with an update of the recent news on this issue herein. Today, the French and Italian industrial production report will be published, and Japan's current account. Here is a market outlook of precious metals for today, October 10th:

From the European Debt Crisis Front – Update and Analysis

Following the tumbling of Dexia, it was reported today that Belgium has agreed to pay 4 billion euros to purchase the local unit of the bank.

Fitch, rating agency, followed the footsteps of S&P and Moody's and announced it lowered the credit rating of Italy and Spain.

These news items could affect traders by adding uncertainly to the financial markets and consequentially push traders towards safe haven investments including gold and silver. This analysis coincides with the recent report from Bloomberg that short selling is at the highest level since 2006.

The U.S. employment inclined in September by 103,000 according to the last U.S. labor report, which was published on Friday, October 7th by the Bureau of Labor Statistics. The rate of unemployment remained unchanged at 9.1%.

Historically, as the U.S employments rise gold tend to decrease; this correlation was mostly due to the effect this news had on the USD; the recent news seem to have worked again in the same direction as indicated in the updated table below:

It shows the correlation between the news of the U.S. labor report and the daily changes in gold and silver up to the last report of October 7th, 2011 (the complete analysis can be found in the gold and silver prices daily outlook for October 7th).

The EURO/USD slightly slipped on Friday by 0.44% to reach 1.3378; the CAD also followed and depreciated against the US Dollar by 0.24%. If major risky currencies (AUD and CAD) will change direction and start to appreciate against the USD, they may help gold and silver prices to incline.

Gold and silver changed direction on Friday and fell following the U.S. labor report, but currently they are traded slightly up. The bullion continues to demonstrate lack of direction with the speculation around the European debt crisis news brings each day mixed signals. The recent news from U.S. about the labor report might keep the misdirection of the precious metals' prices in the short run, but as long as the uncertainty in the markets remains high, gold and silver will likely to make a comeback and their prices will continue their moderate rally during October.

Here is a reminder of the top events and reports that are planed for today (all times GMT):