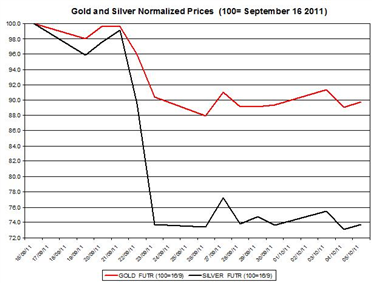 Gold and silver continue to seek direction and ended yesterday moderately rising. The continuous rally the U.S. and Europe stock markets were probably driven from the recent bailout plans in the European markets that may have curbed the gains of gold and silver. Today, the European Central Bank interest rate decision will be announced, BOJ rate decision and U.S. Unemployment Claims report will be published.

The ratio between gold and silver slipped on Wednesday, October 5th to 54.09. During October, silver slightly declined by a larger rate than gold as the ratio increased by 0.3%. 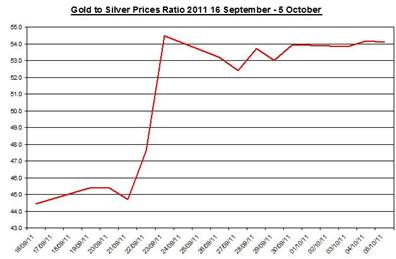 ECB Rate Decision: This rate decision will be the last one for Jean Claude Trichet as President of the European Central Bank. Last month, ECB kept the interest rate unchanged at 1.5%. The recent Euro Area inflation rate sharply inclined to 3% (annual terms) in September; this news lowered the expectations of the financial community that the ECB cutting its rate by 0.5 percent point, and many anticipate a rate cut of 0.25 percent points. If ECB will lower interest rates it is likely to lower the Euros to US dollar exchange rate;

The recent speculation comes from the IMF: it's stated that the International Monetary Fund might purchase Spanish and Italian government bonds alongside the Euro Zone Bailout Fund to help ease the concerns in the markets.

EU financial ministers are seeking to safeguard European banks from the Greek debt exposure after the EU ministers issued a bailout to the French-Belgium Bank Dexia.

This news may have been among the factors to pull up the stock markets in the past few days and may push gold and silver down.

The AUD/USD increase on Wednesday by 0.91% to reach 0.9659; the CAD also followed and appreciated against the USD by 1.06%. Today, the EURO/USD is likely to be in the center of attention as the ECB will announce its rate decision for October. But if major risky currencies will continue to appreciate against the USD during the day, as they did in recent days, they may help the rally of gold and silver.

Gold and silver moderately inclined yesterday, but they didn't change much in October. The upcoming ECB rate decision might stir up the financial markets especially if the ECB will make an unexpected decision (e.g. a 0.5% decrease, which is less likely). The light optimism in the markets over the recent actions taken by EU policymakers to contain the debt crisis in Europe, and the speculation around the Fed's future steps to jump-start the U.S. economy will probably continue the positive sentiment in the financial markets. This sentiment might keep the rally of U.S. and European stock markets in the very short term and thus may curb the rally of gold and silver prices. But as long as the uncertainty in the markets is still high, gold and silver will thrive; so that it's likely that gold and silver will continue their throughout October.