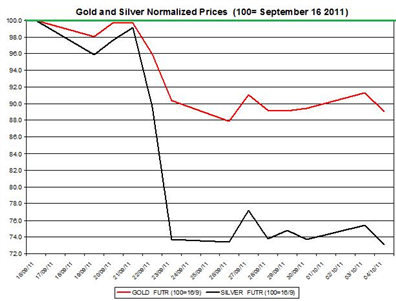 Gold and silver zigzagged again as they sharply declined yesterday and thus erasing the gains they had recorded on Monday. The gains the U.S. stock markets over the recent speech of Bernanke and the new hope of finalized bailout plan for struggling European banks may have helped push gold and silver down. Today, the U.S. ISM Non-Manufacturing PMI will be published today.

U.S. ISM Non-Manufacturing PMI: This monthly report will present the changes of non-manufacturing sector in September 2011. During August this index continued to grow with 53.3%, and it was slightly higher than in July as it reached 57.7%; this index might affect forex and commodities markets (see here last report).

The Chairman of the Federal Reserve – Ben Bernanke testified yesterday before Joint Economic Committee, U.S. Congress. In his testimony, he hinted that the FOMC will consider intervening in the U.S. market and taking additional steps to help the U.S. economy pull out of the recent rescission.

"The Committee will continue to closely monitor economic developments and is prepared to take further action as appropriate to promote a stronger economic recovery in a context of price stability."

This speech may have affected the market yesterday as the U.S. stock markets inclined and gold and silver fell.

EU financial ministers agreed last night to safeguard their banks. This agreement sparked new hopes that EU policymakers will allow the EFSF to lend funds to struggling banks. This news along with the news from Greece has enough funds to keep working until mid-November may have been among the factors to pull the markets up and push gold and silver down.

The US 10-year Treasury yield slightly inclined on Tuesday by 0.02 percent points to 1.81%; during October the 10 year treasury yield has dropped by 0.11 percent points. This shift coincides with the gains in the stock markets and the falls in the bullion markets: The negative correlation between the U.S. long term Treasury yields and gold daily percent changes might suggest that traders continue to zigzag between the stock markets and the "safe haven" investments including gold and U.S. long term Treasuries. If the U.S. long term securities' yields will keep on falling as they did in recent days, it might suggest price will keep on rising.

Gold and silver shifted from rises to falls and keep demonstrating high volatility as they did in September. The recent testimony of the Fed chairman Bernanke, and the speculation around the next step of the European policymakers in regards to the debt crisis may have helped the Euro, AUD and the U.S. stock markets to rise yesterday and consequently may have also affected traders to shift away from LT securities and gold. That being said, I still think that gold and silver are likely to continue their slow recovery from their falls during September.