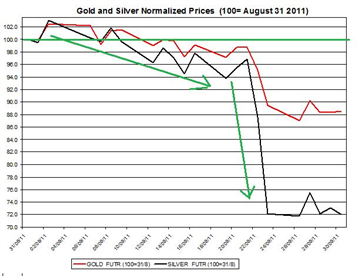 Gold and silver didn't do much on the last day of September, with gold slightly rising and silver declining. Currently, gold and silver are traded sharply up. Today, the U.S. ISM Manufacturing PMI report will be published, and Australian Trade Balance report.

The ratio between gold and silver inclined on Friday, September 30th to 53.93. During September, silver declined by a much higher rate than gold as the ratio increased by 23%. 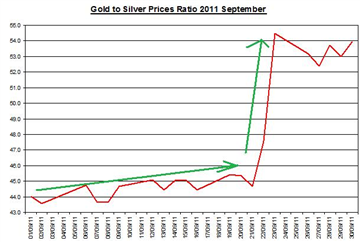 U.S. ISM Manufacturing PMI: This report will show the monthly change in manufacturing sector on a national level during September 2011. In August the index slightly fell to 50.6%; this index might affect traders of major commodities (see here my review of last report);

The EURO/USD exchange rate closed the month with a very sharp drop of 1.54% to reach 1.3388 on Friday. These sharp changes in the EURO/USD may have been stem from the recent hike in Euro Area inflation rate for September (sere below). If major currencies will continue to devalue against the USD during the day, they may also pressure gold and silver to trade down.

According to the recent report of the Eurostat the Euro Area annual inflation rate for September sharply inclined from an annual rate of 2.5% to 3% in September. This hike coincides with the increase in monetary development in August as the M1 inclined from 2.1% in July to 2.8% in August. These changes may have affected the Euro/USD to trade down on Friday. This news also lowers the chances that the ECB will decrease the interest rate by 0.5% and the rate drop of 0.25% is also not certain. 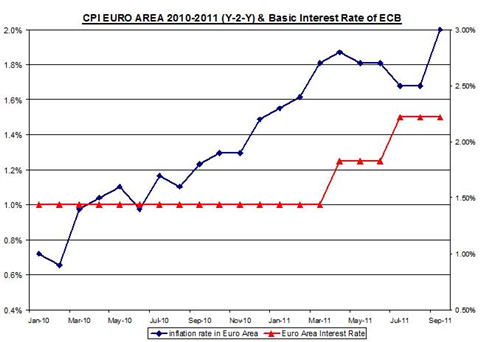 Gold closed the month of September moderately rising, while silver declined. After one of the worst monthly performances for both gold and silver, things are likely to change in October. The relation between the two bullion prices is still robust so that if gold will start to pick up throughout the day over the weak performance of the US stock market, and the drop in LT securities yields, silver will probably follow and incline as well. The recent hike in Euro Area inflation for September will likely to keep the ECB interest rate at 1.5% or perhaps at 1.25%, if Trichet will lower the ECB rate by 0.25 percent points. If there will be an announcement of a rate drops on Thursday, it could affect not only the Euro/USD, but also pressure precious metals down. Today's US PMI manufacturing report might affect precious metals, and if the ISM index will decline, it could contribute to the rally of gold and silver during the first trading day of October.