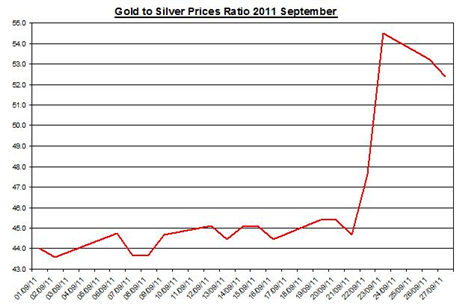 Gold and silver bounced back yesterday and sharply inclined after they had fallen in the past three business days. Currently, gold and silver are traded slightly changes. The speculation around the upcoming speech of Bernanke may affect trading in the commodities and forex markets throughout the day. Many also anticipate tomorrow's German voting on another bailout package for Greece that could ease the uncertainty in the financial community over the stability of the Euro Area. Today, the U.S. Core Durable Goods report will be published.

The ratio between gold and silver decreased on Tuesday, September 27th to 52.40. During September, silver declined by a much higher rate than gold as the ratio increased by 19.5%.

Bernanke Speaks: following the decision of FOMC to purchase LT securities and to sell ST securities, the Chairman of the Fed is likely to address the recent FOMC plan and may also refer to the sharp market reactions in the past couple of days of last week;

U.S. Core Durable Goods: This upcoming August report will indirectly show the changes in U.S. demand for goods including major commodities. During July 2011, manufactured durable goods increased by $7.7 billion or 4.0% to $201.5 billion (for the full report);

The EURO/USD along with other exchange rates rose yesterday: the Euro/USD gained 0.38%; the AUD/USD added 0.82% to its value. The recovery of the major currencies against the USD in the past few days over the new hope of the German Parliament approving the bailout program for Greece tomorrow; many think that this rally of the Euro won't last long. But for now, this rally in Euro and other currencies may contribute gold and silver to halt their falls.

The S&P500 increased for the past three business days; yesterday it increased by 1.07%; during September the S&P500 declined by 3.57%. The weak negative correlation between the S&P500 and gold suggest that if the US stock markets will continue their rally, they may also affect traders to move away from gold. Gold and silver changed direction from the falls in the past three days and increased. The hike in the US stock markets and US securities yields might suggest that trader shifted in the past few days from bonds to the stock market; this might be stemmed from the speculation around of European policymakers approving the bailout program of Greece. The correction in the precious metals' market for the CME margin hike seems to be over, and now with the low rates of gold and silver, traders are slowly returning to the bullion market. By the end of September I still speculate thatgold and silverwill slowly recover from their sharp drops in the past few days, but will finish the month well below their initial price level from the beginning of September.