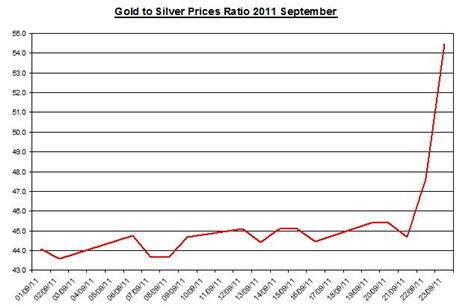 Gold and silver sharply fell in the past couple of days and currently they area traded slightly down. What is next for gold and silver for the rest of September? The recent CME announcement to raise margin requirements on gold and silver contracts is likely to be among the reasons for the current drop in precious metals' prices as hot speculative money is cashing out. The speculation around the European debt crisis mainly of Greece's is likely to be among the prime news items that may affect trading throughout the week. Today, the U.S. New Home Sales will be published.

The ratio between gold and silver sharply increased on Friday, September 23rd to 54.48 – the highest ratio in 2011. During September, silver declined by a much higher rate than gold as the ratio increased by 24.2%.

This is the third time in the past couple of months in which CME raised margins requirements on gold contracts: it raised margins twice in August; the last time was back in August 25th by 27%. On August 24th, gold shed 5.59% of its value, and silver declined by 7.39%.

This decision is most likely among the main reasons for the ongoing freefall in gold and silver in the past couple of days and may continue to affect traders throughout the day. The new rates will come into affect by the close of business on Monday, September 26th.

U.S. New Home Sales:in the recent report (July 2011), the sales of new homes slightly decreased by 0.7% compared with the number of new homes sold in June 2011; if this drop will continue, it may only further indicate a slowdown in the US housing markets and may affect commodities prices;

The EURO/USD along with other exchange rates bounced back on Friday: the Euro/USD inclined by 0.27% to 1.3501. The Federal Reserve's stimulus plan might have triggered the strengthening of USD during most of last week, but the concerns in Europe over a Greek default are likely to keep the USD strong. If the USD will continue to appreciate against major currencies, as it did during most of September, it may further pressure gold and silver to trade down.

The US 10-year Treasury yields sharply increased by 0.12 percent points to 1.84%; during September they have fallen by 0.39 percent points. The recent announcement of CME to raise margins also referred to long term securities so the recent increase in yields coincided with the margin hikes. There was a negative correlation between the US long term Treasury yields and gold daily percent changes in recent months, but this pattern has weakened in the past several weeks; on Friday both investments slipped when the CME made its announcement. 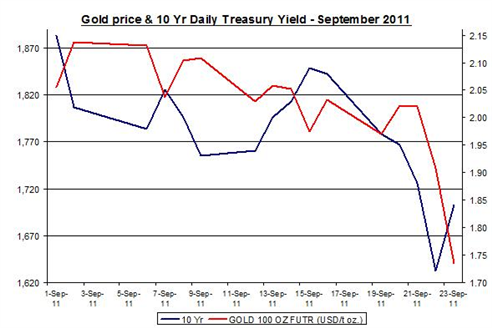 Gold and silver precipitately declined in the past couple of business days and are likely to continue dropping throughout the day over the CME announcement to raise margins requirement on gold and silver contracts. The uncertainty in the Euro Area over the debt crisis may also have some affect on traders that will decrease their holding in Euro based securities, which in turn may also affect the Euro/USD to trade down. That being said, by the end of September I still speculate thatgoldwill slowly recover from its current sharp falls, but will most likely finish the month well below its initial price level from the beginning of September.Silver, which usually is more unstable than gold, is likely to remain even further below its initial price level.