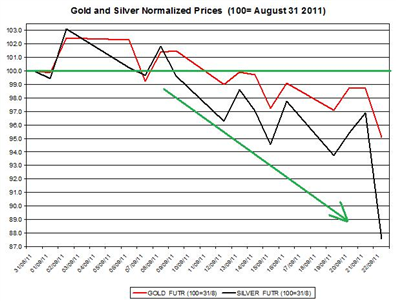 Gold and silver took a real hit to the chin yesterday as they have plummeted to their monthly low. On the other hand most of the major commodities and currencies (AUD, CAD) have also suffered sharp falls yesterday. It's hard to attribute all of yesterday's falls in commodities prices to the recent FOMC decision, but this decision may have triggered this avalanche in the Forex, commodities, US Treasuries and US stock markets.

Today, an ECB press conference will be held in which Trichet will speak; the World Bank and IMF will hold a meeting over the weekend to talk about the global economic condition.

ECB conference Trichet speaks: following the recent announcement of the ECB along with other central banks, Trichet will give a speech regarding the economic stability of the Euro Area and the debt crisis in the Europe;

World Bank and IMF meeting: over the weekend there will be a meeting of the IMF and World Bank that will address the financial crisis in Europe and the global economic slowdown.

The US 10-year Treasury yields sharply fell 0.16 percent points to 1.72% - their lowest level in 2011; during September they have fallen by 0.51 percent points. The recent FOMC decision is likely to keep this downward trend and further reduce the LT US securities yields as traders dump other investments and run towards LT US securities before the Fed's new plan will further decrease their yields. There was a negative correlation between the US long term Treasury yields and gold daily percent changes in the last few months, but this pattern has shifted as seen in the chart below. It seems that many traders have started to shift from holding gold towards increasing their holding in LT US securities. 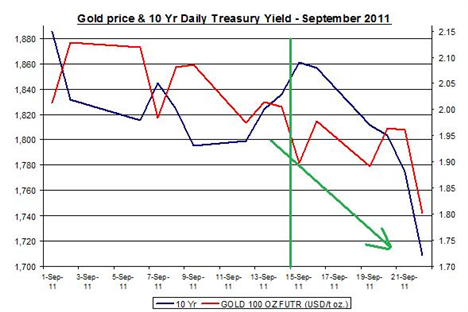 Gold and silver have sharply fallen yesterday and they may continue their decline today – the August upward trend won't repeat itself in September. The FOMC plan wasn't received well by many traders as it may have triggered the recent dive in the financial markets. The shift in the markets might accompany with an ongoing strengthening of USD against major currencies, a decrease in long term securities yields and a decline in commodities prices. That being said, during the rest of September I still speculate thatgoldwill slowly recover from its sharp falls, but will most likely finish the month below their initial price levels from the beginning of the month.Silver that usually is more unstable may remain even further below its initial price level.