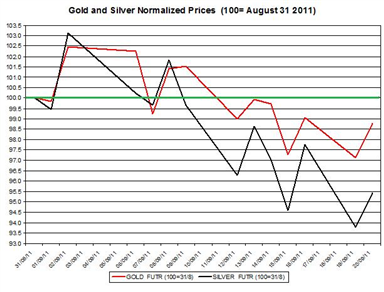 Gold and silver continue to zigzag as they have bounced back yesterday from Monday's falls. Euro/USD and oil prices also slightly inclined yesterday. During September gold changed direction eleven times (on a daily scale) out of the past 13 business days. The FOMC meeting started yesterday and will conclude today. The speculation around what will be next step of the Fed will end today. How will the Fed's decision reading implementing a stimulus plan affect the financial markets and gold and silver?

Today, the Canadian Core CPI will also be published and the U.S. existing home sales report for August.

The ratio between gold and silver reached on Tuesday, September 20th 45.38. During September, gold has slightly outperformed silver as the ratio rose by 3.5%. 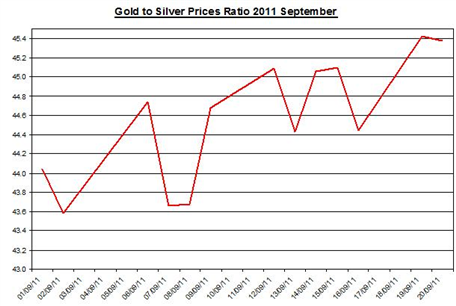 FOMC Meeting – Will There Be a Stimulus Plan?

Following last month's meeting of the Federal Open Market Committee in which the FOMC announced the Fed will keep its interest rates low at least until mid-2013, the September meeting, which will be concluded today, is expected to announce whether the FOMC will issue a new stimulus plan.

The minutes of the last FOMC meeting showed that there were disagreements among members about a stimulus plan:

“Some participants noted thatadditional asset purchasescould be used to provide more accommodation by lowering longer-term interest rates. Others suggested that increasing the average maturity of the System’s portfolio–perhaps by selling securities with relatively short remaining maturities and purchasing securities with relatively long remaining maturities–could have a similar effect on longer-term interest rates. Such an approachwould not boost the size of the Federal Reserve’s balance sheetand the quantity of reserve balances.”

The FOMC could decide to issue a new stimulus plan without increasing the balance sheet of the Fed by purchasing long term US securities in exchange for short term securities. This action is likely to further lower the long term securities' yield.

There is also the possibility of issuing another quantitative easing plan that will expand the balance sheet of the Fed. I have analyzed the cons and pros of another QE program herein.

And of course the Fed could just procrastinate and state it will reexamine the economic progress of the US in the months to come and make a decision in the next FOMC meeting.

If the FOMC will decide today to issue a stimulus plan it could have an effect on bullion market and may further raise the demand for gold and silver.

The Euro/USD changed direction several times throughout the day but eventually closed Tuesday's trading day with a 0.12% increase to 1.3702; during September the EURO/USD rate fell by 4.6%. If the USD will continue to appreciate against major currencies including Euro, AUD and CAD, as it did throughout most of September, it may also pressure gold and silver to trade down.

Decline in US Housing Starts in August

This news provide a mixed signal about he development of the US housing market; however the news of the decrease in housing starts might prove to have a strong effect on traders’ perspective than the building permits’ growth. It was already studied that there is a estimated lagged by one day negative correlation between housing starts and gold; i.e. as housing starts decreases, gold tend to increase the following day.

S&P downgraded Italy’s Credit Rating From +A to A

Standard and Poor’s announced it had downgraded Italy’s credit rating from +A to A on foreign and local long term debt with a negative outlook. This news didn't help much the Euro and brings additional pressure on the financial markets in regards to the economic stability of Euro Zone.

Gold and silver changed direction and inclined yesterday, but during September slightly they have slightly declined. The FOMC meeting today could affect the trade of not only the stock and forex markets, but also commodities markets. If the FOMC will come up with a new stimulus plan it may provide additional back-wind to bullion prices and increase the demand for gold and silver. On the other hand, if the USD will further appreciate against major currencies such as CAD, AUD and Euro, throughout the day, it could pressure down gold and silver. For the remainder of the month I still speculate that gold and silver will slowly recover from their recent drop.