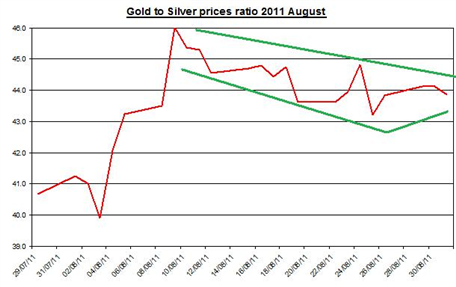 Gold and silver ended with light gains on the last day of August. According to ADP, the US labor market added 91 thousand jobs. This may further curb the speculations around QE3. Yesterday, the US Treasury bill yields rose, and the S&P500 index increased for the fourth straight business day – these indicators show that traders are regaining faith in stock market. Today, the US unemployment claims report will be, and US's ISM Manufacturing PMI.

The ratio between gold and silver remained around 43-45; on Wednesday, August 31st the ratio slightly fell and reached 43.85. During August, gold has outperformed silver as the ratio inclined by 7.8%.

According to the recent ADP report, US employment inclined by 91,000 during August. If this trend will continue, it will at least keep the unemployment rate from rising, and perhaps even curb some of the speculations around the FOMC meeting in September and whether there will be an additional stimulus plan. The minutes of the FOMC recent meeting that was published yesterday reveled that a few members are considering implementing another stimulus plan. If there will be QE3, it may increase the risk of inflation and push more traders towards gold and silver.

U.S. ISM Manufacturing PMI: This report indicates the monthly change in US manufacturing sector. During last month, the index fell to 50.9%; this index might affect traders of commodities (see here my review of last report);

Weekly U.S. unemployment claims: For the week ending on August 20th, initial claims increased by 5,000 to 417,000 claims; this report could further indicate the economic progress of the US in the labor market.

The US 10-year Treasury yields zigzagged again and finished yesterday with a 0.04 percent points increase; during August they have fallen by 0.52 percent points. If the demand for U.S. Treasury will drop and the yields will further rise, it may further indicate a change in the direction of traders seeking safe heavens including gold and silver.

Gold and silver finished August on a positive note with light gains, but they may slip today as the stock market continues to build up momentum and the US Treasury bill yields are rising again. The uncertainly in the financial markets is still high especially in the first few days of a month. That being said, I still speculate that gold and silver will continue to increase at a slow pace even if there might be some falls along the way.