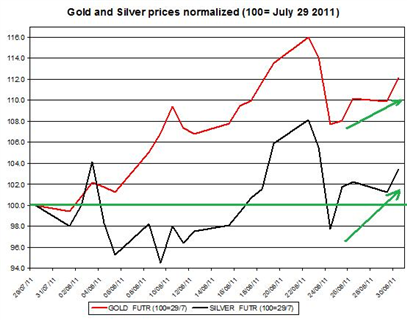 Gold and silver rallied yesterday and thus erased the moderate price falls they have recorded on Monday. The US consumer confidence report seems to have had little effect on bullion market. On the other hand, the FOMC minutes revealed some insight and rekindled the speculation around a new stimulus plan by the Fed. Today, there are many reports to be published including: the Euro Area rate of unemployment, annual inflation, Canadian GDP, ADP estimate of US change in non-farm employment and China's Manufacturing PMI.

The ratio between gold and silver continues to dwindle around 43-45; on Tuesday, August 30th the ratio remained unchanged at 44.13. During August, gold has outperformed silver as the ratio inclined by 8.5%.

"The information on economic activity received since the June FOMC meeting was weaker than the staff had anticipated, and the projection for real GDP growth in the second half of 2011 and in 2012 was marked down notably… Meeting participants generally noted that overall labor market conditions had deteriorated in recent months…Most meeting participants indicated that the weakness in consumer spending in recent months was unexpected. ..The weakness in household and business spending was accompanied by fiscal consolidation at the state and local level… Participants generally saw the degree of uncertainty surrounding the outlook for economic growth as having risen appreciably.

A few members have suggested asset purchases in order to lower long term interest rates; other members suggested just lowering the long term rates without raising the balance sheet of the Federal Reserve:

"Some participants noted that additional asset purchases could be used to provide more accommodation by lowering longer-term interest rates. Others suggested that increasing the average maturity of the System's portfolio--perhaps by selling securities with relatively short remaining maturities and purchasing securities with relatively long remaining maturities--could have a similar effect on longer-term interest rates. Such an approach would not boost the size of the Federal Reserve's balance sheet and the quantity of reserve balances."

Other members stated that implementing an additional stimulus plan will just be add an inflation risk and won't do much good:

"…these participants thought that providing additional stimulus at this time would risk boosting inflation without providing a significant gain in output or employment."

This news only added more speculation to the market and now all will look toward the next meeting of the FOMC in September 21-22 to see if there will be eventually any additional stimulus plan of any sort.

ADP estimate of U.S. change in non-farm employment: ADP will provide an estimate of the US labor report for August;

The US 10-year Treasury yields fell yesterday by 0.09 percent points, and during August they have fell by 0.63 percent points. If the demand for U.S. Treasury bills will rise and the yields will further rise, it may further indicate that traders are seeking safe heavens such as gold and silver, and thus gold and silver may rise again. The chart below shows the relation between gold price and 10 year U.S. Treasury bills yield during August. It shows as gold inclined, the 10 Yr yields fell.

Gold and silver bounced back yesterday, after they had fell in the previous day rallied in the previous few days. The uncertainly in the financial markets is still high and we are nearing the end of the month – as the short term future contracts are about to expire, so gold and silver may change direction throughout the day. If the news from Euro and US regarding the reports to be published today will show a slowdown, this may further push traders towards the bullion markets. The movement in the bonds market may also contribute to the changes in the gold and silver throughout the day. I still speculate that gold and silver will continue to increase at a slower pace than during the second week of August.