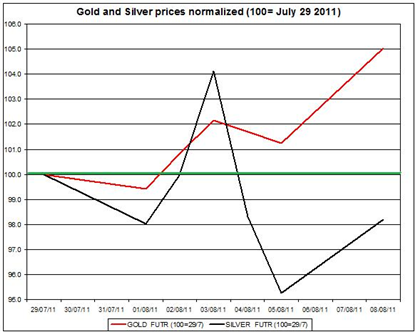 The stock markets took a plunge yesterday over the decision of the rating agency Standard and Poor's to downgrade the US credit rating; President Obama's attempt to stabilize the markets didn't by addressing the recent S&P's decision didn’t stop the sharp falls in the markets. Gold reached news highs and is likely to continue the sharp rises during the day. Today, the Federal Reserve will meet to decide on the interest rate; Canadian housing starts stats will be published.

The chart below shows the normalized gold and silver (July 29th 2011=100). As seen below, gold rose very rapidly during most of the August so far; on the other hand, silver erased most of its gains the end of last week so that eventually it didn't reach a new high this month (yet).

Today the Federal Reserve will decide on the basic interest rate decision and the Bank's monetary policy. Due to the recent downgrade of the US credit rating, it's becoming less likely for the Fed to raise interest rates or to announce the implementation of QE3; since the markets are pulling funds from the US economy and stock markets, raising rates will be equivalent to adding gas to an open fire: it will just further pull money from the stock markets. Therefore, it's more likely that Bernanke will try to calm the markets, reassure the financial community of the monetary stability of the US economy and will pull back the QE3 card for the near future.

The American stock markets suffered the most yesterday from the reaction to the US credit rating downgrade over the weekend: the S&P500 fell by 6.66% yesterday, the Dow Jones index plummeted by 5.55%. The market also promptly reacted as gold rose very sharply during most of August. The chart below shows the linear correlations of the daily percent changes of bullion prices (gold and silver) with S&P500 during the past several months. The chart shows that the linear correlation of gold with S&P500 is currently negative and strong; the same was also true in July. Silver price, on the other hand, didn't show much of a correlation to S&P500 in the past couple of months; this means that the drastic falls in the Stock markets are in line with the rises in gold prices but not of silver price. This finding should be taken with a grain of salt because there are very few samples points in August so that this finding isn't significant. 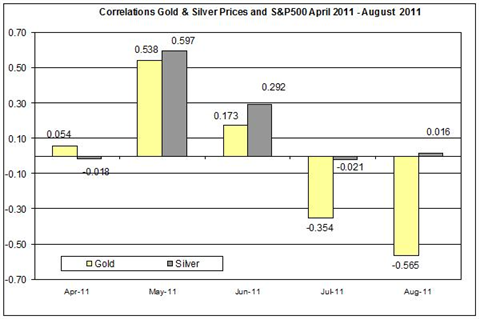 The Euro/USD declined on Monday by 0.73%; the USD appreciated against other currencies including the AUD and CAD. If the USD will continue to depreciate during the day, this might continue to curb some of the rally of gold and silver. Currently it seems that silver, more than gold is affected from the appreciations of the USD.

Gold continues its rally in August mainly due to the back wind it enjoys from the sharp falls in the Stock markets; as long as the stock market will trade down, more traders will push their finds into gold. The news of the US downgrade will continue to push traders from stock market towards gold; the Federal Reserve meeting today might also affect the market depends on the decisions, if any, that will be made there. On the other hand, it seems that silver isn't rising as gold is, because silver is less affected by the fall in the Stock markets and is more affected by the changes in the USD which is rising due to heavy trading. In any case, these sharp changes are likely to dissipate in the next few days and then gold and silver will stabilize and resume their slow upward trend.

For further reading:Gold and silver prices outlook for August 2011