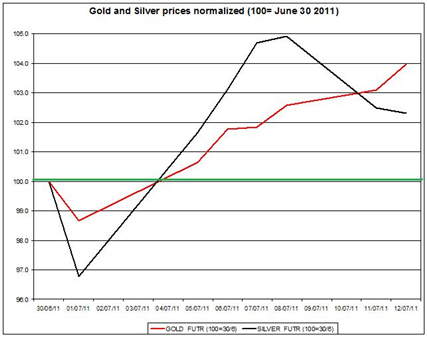 Gold Market Keeps Heating Up – What's Next For Gold? July 13

Gold continues its rally as it rose for six consecutive days; gold and silver are currently traded up on the weak US dollar. Today, the Chairman of the Fed will testify, the Eurostat will publish the Euro Area industrial production report and China will present its GDP for second quarter.

Let's examine the news of the day related to the precious metals market for today July 13th:

The chart below shows the normalized gold and silver (June 30th 2011=100). It shows that gold and silver started July with falls, then they have inclined, and currently they are both above their initial price level from the beginning of the month.

As of Tuesday, July 12th the ratio between gold and silver remains around the 43 mark as it rose to 43.84; during July this ratio inclined by only 1.6%, which means that during July (up to now) gold moderately outperformed silver. 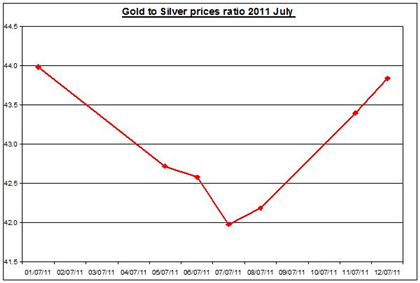 China, Euro Zone and US Economy

Today, China will publish its quarterly report 2011; due to the recent raises in the interest rate and loans restrictions by the People Bank of China, this might have also slowed down in the economic growth rate of China during the second quarter. This report could affect the changes in the commodities markets.

Ben Bernanke will testify before the US senate today. Following Bernanke's recent press conference in which he said there won't be a new QE3 (for now), it will be interesting to see if he might hint of a new stimulus plan considering the recent dissipating US labor report.

The EURO/USD exchange rate fell during July by 3.6%; During June, the EURO to US dollar exchange rate was highly positively correlated with the daily percent changes of gold and silver . But this isn't the case as the EURO/USD and gold (daily percent changes) are currently negatively correlated. The last time there was such a shift in the relation between EURO/USD and gold was back in April 2011 when gold and silver rose very sharply. On the other hand, CAD/USD continues to be correlated in the same direction as in June. As the USD depreciated against the CAD by 0.3%, this may be among the factors to affect the strength of gold.

Gold is currently experiencing its longest rally in recent months, after it has been falling in the past couple of months. This shift in direction might continue if the US economy will continue to show a slow down on the one hand, and Euro zone's risk premium will keep on rising due to the recent bailouts. This might explain why in recent week not only the Euro/USD declined, but also the USD depreciated against other currencies including CAD.

For further reading:Gold and silver prices outlook for July 2011