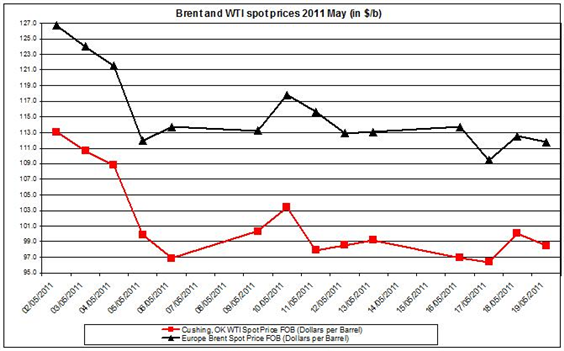 Oil prices started off the last day of the week with moderate changes after they declined yesterday.

Let's examine the recent news related to oil trading for today, May 20th:

Brent oil also moderately declined yesterday by 0.66%; during May Brent declined by 11.7%.

The chart below shows the changes of WTI and Brent prices during May 2011.

As seen, oil prices fell sharply at the first few days of May and since then remained more then 10% below the initial price level.

The premium of Brent oil over WTI reached on Thursday, May 19th 13.34$/b. During May, the premium shifted and fluctuated very rapidly and ranged between 12 and 17.8$. 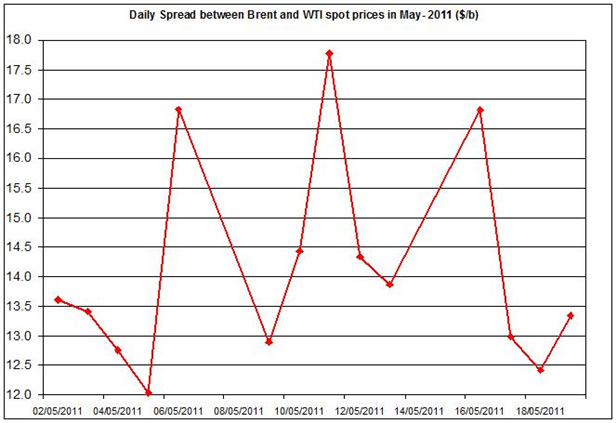 Despite the rapid change in this premium, there was still a strong correlation between the daily percent changes of these two energy prices during May as seen in the chart below. 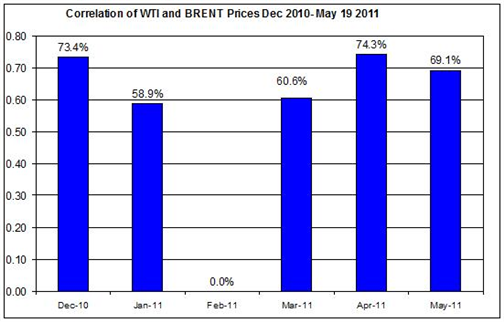 The US dollar and Oil During May

The chart below shows the strong correlation among EURO/USD, USD/CAD and WTI oil. 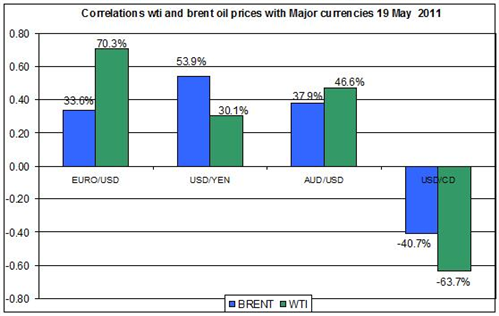 The uncertainty in the financial markets related to the directions of major economies including US, Europe and Japan and speculations around their energy demand in the near future are probably responsible, in part, to the changes we currently see in oil prices during May.

Following the takeover of Mahmoud Ahmadinejad, President of Iran, over oil ministry, there are still concerns in the oil market regarding his attendance in attend the upcoming OPEC meeting next month on June 8th, in Vienna Austria.

Iran is among the founding countries of OPEC and holds the world's third largest proven oil reserves with 137.6 billion bbl, and is the second largest oil producer worldwide.

If Ahmadinejad will try to limit oil output in the upcoming OPEC meeting, this could affect oil prices and keep them up and even might push them a bit higher in the months to come.

There is an ongoing speculation regarding the Fed's next move in stimulating the US economy. According to Bloomberg there is speculation that the Fed won't tighten monetary policy and this may further push commodities prices up.

See here for the more news updates from the US, Middle East, Japan and Canada.

Oil prices declined yesterday, and thus continued to demonstrate no clear trend as they did in the recent weeks; this is after they fell very sharply at the first few days of May. .

Oil traders continue to show no clear direction in regards to oil prices and thus oil remains at its current level with WTI oil remains around 100$ and Brent oil around the 110$.

There are still concerns from both the supply and demand sides: from the demand side, the speculation around the future of major economies' oil consumption including U.S., Europe, Japan and China; from the supply side, there are concerns in regards to the upcoming OPEC meeting and the plans of OPEC to increase/decrease/leave unchanged its oil production.

There are still macroeconomic considerations such as the US recovery and Europe's debt that could and will affect oil prices via the US dollar compared to other major currencies.

I still speculate that in the short term all these factors will continue to pull oil in different directions and eventually keep it at its current high price.