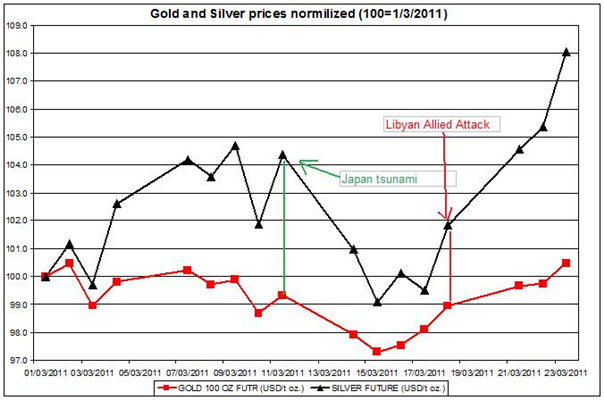 The Libyan war led by the allied forces continue, and the Japanese turmoil is still far from over; in such times of uncertainty the speculation around precious metals runs high, which might be one of the reasons for the recent rally in gold and silver prices.

Let's examine the mains news that might affect the changes in gold and silver as of March 24th:

Japanese officials state that the number of dead has risen to over 9,300 and missing people are at over 16,500 so that the total is over 25,800 missing or dead.

The recent update from the nuclear reactor in Fukushima is that there progress in containing the cores in the reactor; however there are still high radiations levels reaching as far as Tokyo.

There is no clear estimate on how much damage the country suffered however it will probably be over billions of dollars.

The allied forces led by the US continued their air attack on Qaddafi's ground forces as reported by Bloomberg. There is still no clear sight as to when the allied forces will get out of Libya.

There are reports of unrest and protests in other Middle East countries including Syria, Yemen and Bahrain (see here for more on these subjects).

As seen in the chart below, there is an ongoing upward trend in silver and gold prices especially in the past week; however, up to date, during March gold rose by only 0. 5% while silver rose by 8%.

This recent rally might be, in part, attributed to the uncertainty that rises from the attack of the allied forces on Libya andthe tsunami attack on Japan. I have added the in the chart above the timeline of these two events.

In regards to Japan, one of the reasons for speculation around the rally of gold and silver might be related to the Bank of Japan's increase in quantitative easing program by 15 trillion yen (183 billion USD). There The expectations are that in order to finance this tsunami BOJ will have to sell many of its foreign exchange reserves mainly USD. This might further weaken the US dollar and thus raise prices of gold and silver.

The gold to silver ratio: as of yesterday, March 23rd the ratio between gold and silver keeps on falling and reached 38.66 – the lowest level this year; this shows that silver are rising at a much higher rate than gold do. 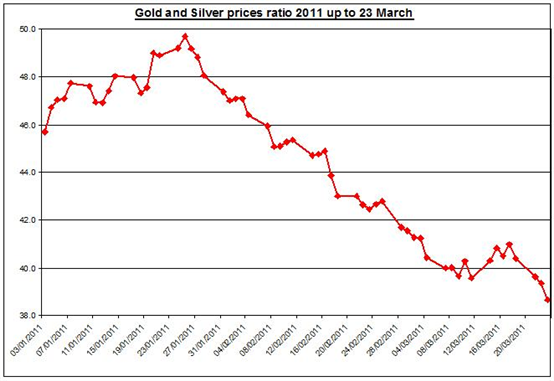 It is still not clear if this recent upward trend will last, however I speculate that in the short term we will probably continue seeing a rise in gold prices throughout the day; due to the uncertainty in financial markets there will be many fluctuations, and high volatility in these metals prices.

Here is a reminder of the top news and reports that are published today and tomorrow that might affect themarkets (all times GMT):

13.30 – US Department of Commerce - Report on Durable Goods

10.00 – Monetary developments in the euro area