The Takeaway: The divide between short term and long term correlations between gold and major currency pairs provides commentary that although in the short term (up to one week) gold is still a risk asset, but in the longer term view, it is still protecting against a weaker dollar. The recovery of correlations between gold and most notably the Australian and New Zealand dollars suggests gold, like the two polymer-banknote dollars, will be heavily influenced by developments in the Eurozone.

Weekly Commentary: Gold drifted lower this week from the start, but did not exactly follow the sharp drop in US equity indices as expected of the risk asset. As assets this week were dragged by different forces, gold itself was pressured by further fiscal cliff concerns, but buoyed by Fedspeak promising to improve the current labor markets. Nevertheless from a short term perspective, the yellow metals’ correlation has become extremely strong with the Australian dollar, New Zealand dollar, and the Japanese yen.

Before the Thanksgiving Holiday in the United States on Thursday and a reduced trading day on Friday, traders will be awaiting political developments in Europe on Monday and Tuesday. Greece still awaits its EUR 31.5 billion tranche and it has already delayed a payment of a November 16th maturity my issuing short term one-week and four-week bills. On Monday President of the European Council Herman Van Rompuy will meet with ministers on EU budget talks, largely expected to be around Spanish and Italian austerity plans. On Tuesday, Eurozone (EU17) finance ministers will meet and most likely release the next tranche after almost two weeks of delay.

However, gold will still have to watch for potential risks from other regions, primarily the United States and the Middle East. While progress on the fiscal cliff is unlikely to be large due to the shortened week, increasingly hostile developments between Israel and Hamas that may develop into an incursion into the Gaza Strip, may hit risk assets including gold. Volatility may be heavy during the first part of the week, but the lack of US participation in the markets on Thursday and Friday could lead to a relatively quiet week.

Commodities Forecast: Oil, Gold at Risk as Markets Focus on US Budget Woes 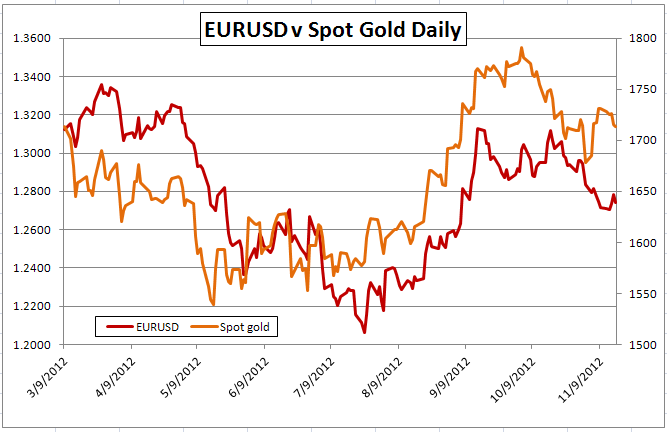 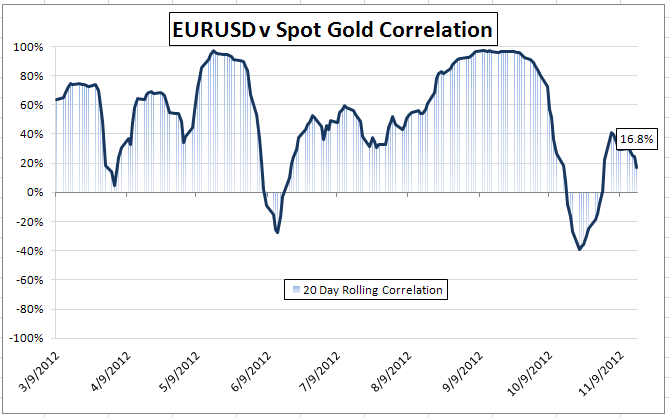